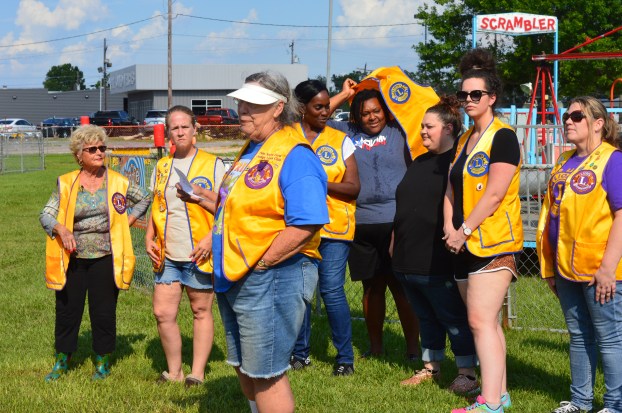 Dawn Burleigh/Orange Leader Members of Lions Clubs throughout Orange County gather for an announcement prior to the ribbon cutting to open the gates for this year’s carnival.

What Made Orange Great: The Lions Club in Orange: “We Serve”

The idea of a Lions Club in Orange came from a young man, Dick Terry, who moved to Orange from Rosenberg in 1936. Terry wanted to join a service organization and found that the one organization in Orange at that time did not meet his needs. He had been a member of the Lions Club in Rosenberg and decided to start a club in Orange. In order to have a charter granted there had to be 25 prospective members. Terry could only enlist 24. Not willing to give up on his dream of having a club in Orange, he made an appeal for a charter to Melvin Jones, the founder and head of the organization. Jones granted his request, and a charter was issued. The club had organized on May 12, 1937, and the charter was granted on June10, 1937 with Howard Peterson serving as the first president. By the time the charter went into effect, the 25th member had joined.

The first project of the new club was to assist a young man who needed surgery. The club was new and had no funds so the membership “passed the hat” and raised $50 to pay for the surgery. This was the only time “passing the hat has been necessary.”

A variety show was the club’s first fundraiser after receiving their charter. The show was a success, raising $127. It was a complete sellout with no standing room and $12 had to be refunded.

In 1940, a survey was conducted in Orange County and found that there were 300 indigent children needing eyeglasses. The club had limited funds but was able to provide glasses for 60 children.

During the World War II years, the club conducted scrap material drives. The drive in September 1945 brought in over 30,000 pounds of waste paper.

In 1947, the club sponsored the largest Christmas party ever held in Orange up to that time. The party was held on the grounds of the city hall and over 1,000 children attended.

Since those early years, the club has continued to grow, both in membership and activities to raise funds. Some of those activities have included doing visual screenings and providing eyeglasses for qualifying residents of Orange County, the Back to School Orange County program, Cops and Kids, Salvation Army bellringing at Christmas, Holiday Food Baskets, White Cane Day, The Lions Club Charity Carnival, and Special Friends Day at the Carnival, as well as working with other local charities.

The Orange Lions Club is one of the oldest non-profit organizations in the State of Texas.

In 1938, the first Lions Club Charity Carnival was held and raised $115 in profit. The second carnival raised a profit of $410.12 Recent carnivals have raised as much as $100,000. The carnival held in 2021 was the 80th carnival in club history. It takes about a month to set up the rides and the food and games booths.

The club added more small rides, until 1947 when a merry-go-round was purchased. In 1948, the club bought a Ferris wheel, in 1982 a tilt-a-whirl. Several other rides have been purchased in the carnival’s history.

All of the rides are the property of the Orange Lions Club and are used only at the carnival and are never loaned out or rented to other organizations. Once the rides are assembled, they are inspected by a state certified inspector.

The first carnival was held in West End Park and soon outgrew that location. The next location was on 8th Street and Green Avenue.

The club had purchased 6.8 acres of land on Adams Bayou and Green Avenue with plans to among other things, build a building for the use of the club. When it was decided not to build on the land, the club donated the land in 1947 to the City of Orange for use as a park.

When the downtown location of the carnival was no longer adequate, the carnival moved to the park on the land the club donated to the city where it is held today. The park has been named “Lions Park” the entrance is guarded by a large concrete lion.

Over the years there have been some favorites in the food line. The Bridge City Lions Club has been famous for its funnel cakes. Possibly the most famous of the carnival foods were the burgers cooked by the late Lion Larry David, aka “Uncle Larry”. There was always a line several people deep to get one of “Uncle Larry’s Burgers.” Lion Stump Weatherford once said, “A lot of people come to the carnival just to get one of Uncle Larry’s burgers.”

Over the history of the carnival there have been postponements and cancellations due to bad weather, including hurricanes. Hurricane Ike flooded the carnival grounds after the rides had been set up and caused the rides to have to be dried out, cleaned up and inspected very carefully. The Coronavirus caused the carnival to be cancelled the year as so many other things were cancelled.

The Orange Lions Club has overcome any obstacle and continued to provide for the charities that it supports. It has been a valuable contributor to the lives of citizens in Orange County and will continue to do so in the future. The motto Lions live by is “We Serve.”

By Courtney Zetar Natalya and Julian Hebert are motivated by the saying, “Teamwork makes the dream work.” These are words... read more