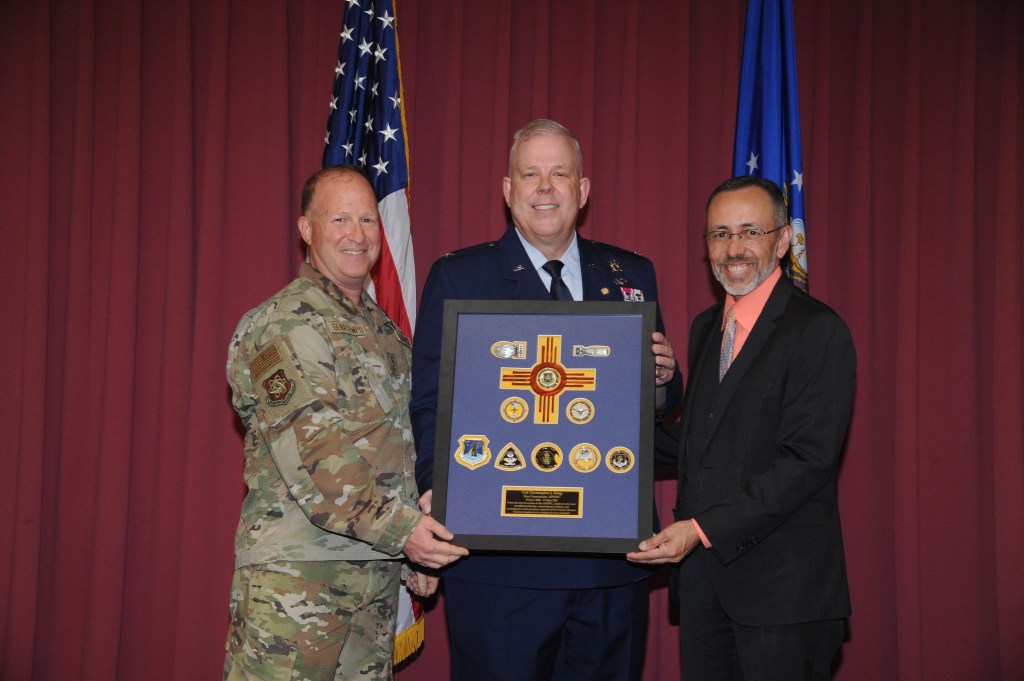 He served as the vice commander from June 2020 to June 2021, capping a career largely dedicated to nuclear deterrence.

The presiding official, retired Maj. Gen. Everett H. Thomas, shared a few memories about King and his service. Thomas was the AFNWC commander from 2008-2011 and also one of King’s former supervisors when both were in missile operations.

Noting King started his Air Force career as an enlisted member, Thomas said King had been in Security Forces about two years and was working the gate at Lackland AFB, Texas, when he began stopping one civilian in a blue Mustang on a regular basis.  This was at a time when DoD employees needed only a decal on their cars to be waved through a gate onto the base, Thomas pointed out.

King chatting with the driver at the gate made her late to work a couple of times, which eventually led to a letter of reprimand for the young airman.  Undeterred, King wrote the woman a “ticket” to meet him at his dorm, which led to dinner and eventually marriage. He has been married to Connie for 34 years now, which included 19 military moves, two children and six grandchildren.

King signed up with the Air Force during his senior year of high school. At graduation, his principal tried to hire him as a teacher, but King said, “I owe my life to Uncle Sam,” turning down the offer. He would be awarded three master’s degrees during his career.

When King enlisted in 1985, his assignments included an overseas tour in the Middle East. During Desert Shield and Desert Storm, he supported F-111 Aardvark tactical fighter-bomber operations at Taif Air Base, Saudi Arabia.

He attained the non-commissioned officer rank of technical sergeant prior to earning his commission through Officer Training School in 1996.

“Chris excelled at everything,” Thomas said. “After 11 years as an enlisted member, he decided to become an officer. He graduated from Officer Training School near the top of his class, then went into space operations training at Vandenberg Air Force Base, and eventually ended up in spacelift at Cape Canaveral and Patrick Air Force Base in Florida.”

After spacelift, he entered ICBM operations at Malmstrom AFB, Montana. His career would lead him to ICBM-related assignments at Minot AFB, North Dakota; Offutt Air Force Base, Nebraska; and even a coveted assignment among the tropical Seychelles islands in the Indian Ocean.

He capped his career with several assignments at Kirtland AFB, New Mexico. Prior to assuming his current position, King was the vice commander of the 377th Air Base Wing at the base. He also served twice in AFNWC, first as its inspector general and finally as its vice commander.

“While at AFNWC, Colonel King’s commitment to our mission drove a multitude of solid results which will contribute to the United States’ nuclear deterrence posture well into the future, ensuring our nation’s most powerful weapons are never doubted and always feared,” said Maj. Gen. Anthony Genatempo, current AFNWC commander and program executive officer for strategic systems. “His experience and perspectives in ICBM operations, maintenance and security contributed greatly to our center’s herculean efforts this past year to sustain the Minuteman III ICBM during the development of its next-generation replacement, the Ground Based Strategic Deterrent.”

King closed out the ceremony by thanking his family and friends in attendance. He added that both of his children are in the military “serving this country well.” He also joked about the money riding among his friends on if he would shed a few years at the event; he quickly paid up.

“After 36 years, you come across a lot of great people,” King said. “I love you all and I’m glad you’re here. I’m going to miss everybody and thank you for being a part of my Air Force family, there is the family I chose and the one I was given in the Air Force.”