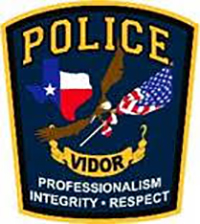 PRESS RELEASE — On Sunday, July 4, 2021, at approximately 3:31 AM, the Vidor Police Department Dispatch Center received a call, in reference to a domestic disturbance in the 100 block of Heritage, Vidor, Texas. The caller advised that she and her husband were in an altercation in which she was assaulted, and he was threatening her with a firearm. Officers responded to the scene and staged around the residence. The caller informed the dispatcher that besides her husband there were 4 small children and a nurse that was treating one of the children that was on a vent. Dispatch was able to get the wife and 6-month-old baby to leave the residence followed by the nurse and child on the vent.

Multiple attempts were made to contact the subject inside the residence via phone and over the patrol car loudspeaker. The subject would not make contact with law enforcement. The Orange County Sheriff’s Office SWAT team was activated and called to the scene. SWAT team members deployed. At approximately 6:37 AM, the subject exited the residence and was taken into custody without incident.

The suspect is identified as: