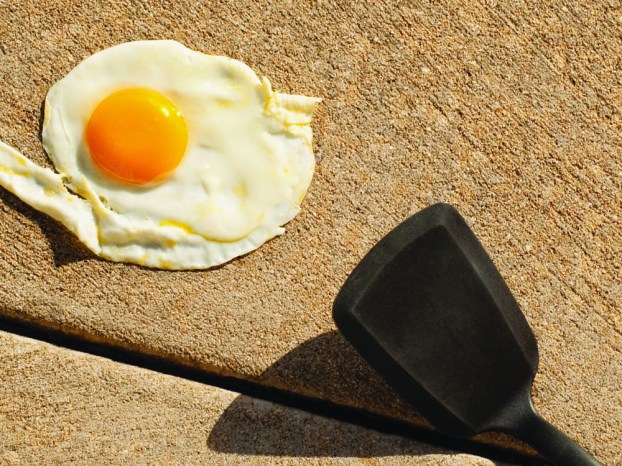 Take a Crack at this Holiday: National Fry an Egg on a Sidewalk Day

While the Fourth of July is most commonly thought of as American Independence Day, you may not know that July 4th is also National Fry an Egg on a Sidewalk Day. The holiday originates from the common heat-inducing saying “it’s so hot that you could fry an egg on the sidewalk”.

One of the first written records of the idea comes to us from an 1899 issue of the Atlanta Constitution, a print newspaper. The author of the issue, Francis Henry Wade, alerts his readers of the high temperatures by advising that “the bricks of the sidewalks [are] hot enough to fry eggs”. The phrase has inspired hundreds of thousands of heat-stricken Americans to take a crack at frying an egg on a sidewalk every summer.

However, many of you may be wondering, can you actually fry an egg on a sidewalk? Asking around the City of Orange, local resident, Sam Harris stated that “if it’s hot enough, you could fry just about anything, even bacon”.

Well, besides the health concerns of dropping an egg on the pavement, the feat of safely cooking an egg on a sidewalk seems to be impossible. Concrete, being a very poor conductor of heat, is unable to retain the temperatures required to fully cook after the egg is cracked onto the sidewalk. The same phenomenon happens in your kitchen as well, when frying eggs on your pan, Chef Wylie Dufrense, a renowned egg connoisseur, stated that while cracking an egg onto a pan, “the temperature drops immediately, but recovery is also very quick because you’re on a burner. There’s no recovery on the sidewalk or the road.”

The uneven, porous, structure of concrete also does not serve as a good cooking surface, Dufresne noted, “In order for this to work you want something that approximates a pan. It’s got to be smoother and tighter, and also going to be hotter and hold its heat better.”

Engineers gather to face the challenge, at the annual Oatman Sidewalk Frying contest in Arizona. Contestants are tasked with frying the most “edible looking” egg using only solar energy as a heat source. Creative solutions to the problem include the construction of an oversized magnifying glass, aluminum foil, and mirrors redirecting light and heat to the egg. Some contestants even were able to fry other breakfasts foods like bacon, our very own Sam Harris would approve.

While frying an edible egg on a sidewalk may be unlikely, the thought of it has brought hundreds of thousands of people together to try, so, this fourth of July, take a moment to appreciate the lesser-known holiday, and perhaps, take a crack at it.

The annual July 4th celebrations due to unfavorable conditions at the Riverside Pavilion (near the City of Orange Boat Ramp), the July 4th Concert and Fireworks Celebration has been relocated to the Riverfront Boardwalk and Pavilion, located at 601 W. Division Avenue in Orange.

The celebration will begin with concessions and activities at 5 p.m. followed by live entertainment from Wayne Toups & ZydeCajun at 7 p.m. A spectacular fireworks display will begin immediately following the concert at 9 p.m. This event is free to the public, and no dogs or pets will be allowed at the Riverside Pavilion, however, coolers are welcome and chairs are encouraged.

Offering a helping hand while filling up

Orange County Disaster Rebuild will get a helping hand from local food trucks such as Taco Rey on Fridays in... read more