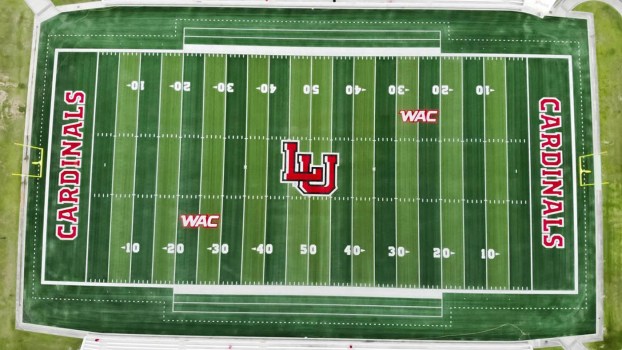 Photo courtesy Lamar Athletics Lamar’s Provost Stadium has received a upgrade as the Cardinals will enter the WAC.

BEAUMONT, Texas – In January, Lamar University accepted a bid to join the Western Athletic Conference (WAC), and Thursday that move became official as LU’s first official day in a new league. In addition to joining WAC, several of LU’s athletic venues received an upgrade in preparation for the new year in a new league.

LU replaced the turf at Provost Umphrey Stadium which features the block LU logo at the 50-yard line, with the WAC logos appearing on the 25-yard lines. The red end zones are gone and replaced by green base with the word “CARDINALS” in each.

“We’re extremely excited about the new look to Provost Umphrey Stadium and McDonald Gym,” said Director of Athletics Marco Born.”Today is the beginning of an exciting new chapter for LU athletics. In terms of the new surface at Provost Umphrey Stadium, it not only adds to the atmosphere of gameday, but CoolPlay technology will be an asset to our team. As we all know, we can face some extreme heat in Southeast Texas and this surface provides the extra safety that will benefit our student-athletes in the long run.”

With thousands of installations, the slit-film system has become one of the most trusted artificial surfaces in North America. It is also being used by the NFL’s Detroit Lions and 2021 Super Bowl Champion Tampa Bay Buccaneers, as well as the University of Nebraska, Florida, Miami (Fla.), Texas Tech and Ohio State.

In addition to the new turf at Provost Umphrey Stadium, LU also updated the court at McDonald Gym. The home to LU volleyball now sports a court with a red border that features the block LU logo at midcourt with “CARDINALS” located on the baseline. The WAC logo is inset on each sideline.

There will be further upgrades coming throughout the summer as LU will also be updating the court at the Montagne Center later this month.

Believe it or not. It won’t be long until the 2021 high school football campaign is upon us and hopefully... read more