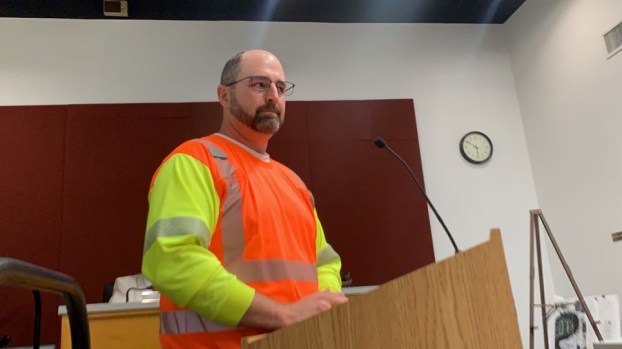 Orange City Council members heard the project proposal for the MacArthur Drive Sidewalk and Illumination Project during the Tuesday night meeting, presented by Kenneth Wiemers, an engineer for TxDOT. In support of the proposal, Wiemers said, “Since 2015, we have had eight different pedestrian or bicycle fatalities along this section of roadway”, and saying TxDOT has received requests “to provide some form of relief for traffic and pedestrians”.

The project aims to provide a buffer by building concrete sidewalks five feet away from the side of the road so as to not affect the existing roadway.

Supplementing this, another goal of the project is to provide illumination on the roadway, being that the majority of these deadly accidents happen at night. To illustrate the need for the lighting, Wiemers compared the protection given by the luminescent safety vest he was wearing to the protection the new light poles would provide for pedestrians.

Wiemers requested that the City of Orange provide the maintenance for the lighting poles, in cooperation with the City of West Orange and the City of Pinehurst, for an approximated cost of $5,400 to the city annually. Of the proposal, Mayor Larry Spears Jr. stated that while the city would have to discuss further to make acceptance of the project formal, “$5,400 is worth a person’s life”.

Members of the city council thanked community members and organizers for their participation in the second annual “Juneteenth in the Fruit” celebration.

City Council member Mary McKenna urged citizens to participate in the festivities next year, while Council member Terrie T. Salter followed up by thanking those organizers “who worked really hard to give the community something we really needed.”

Mayor Larry Spears Jr. later joked, “We had our last meeting, we said that we wanted to make Juneteenth an official holiday in the City of Orange and then the next week the President stole our thunder.” and then joking insinuated that “he [the president] must’ve seen us on YouTube.” Spears thanked Dominque Rriggs, an organizer of the Juneteenth celebration who was in attendance, for her involvement in the event.

Dr. Thomas Johnson, president of Lamar State College Orange, thanked the council for donating portions of 4th street to create a plaza area for students. Johnson then revealed that the plaza would be named in honor of Grammy winner and Orange native, Clarence “Gatemouth” Brown. The Gatemouth Plaza will be unveiled to the community at LSCO’s fall festival and will allow students to walk across campus without the risk of having to cross streets.

The Orange City Council passed a motion to extend the waiver of sections of the Code of Ordinances for 90 days to allow for parking, use, and occupancy in a recreational vehicle or travel trailer by a property owner due to damage resulting in homelessness from Hurricane Laura, last fall. This motion was followed by a similar move to extend the adjusted permit fees for repairs to property caused by damage from Hurricane Laura for 90 days.

The council also discussed possible plans for coordinating with community members to repurpose and fix over 130 abandoned properties across the City of Orange.

City of Orange Economic Development Director Jay Trahan delivered City Announcements acknowledging Convention and Visitors Bureau staff for organizing and finalizing the upcoming July 4th celebration which will be held at the Orange Riverside Pavilion off of Simmons Drive and begin at 5 p.m. A concert by Cajun Folk singer Wayne Toups will follow at 7 p.m. and finally, the fireworks show will start at 9 p.m.