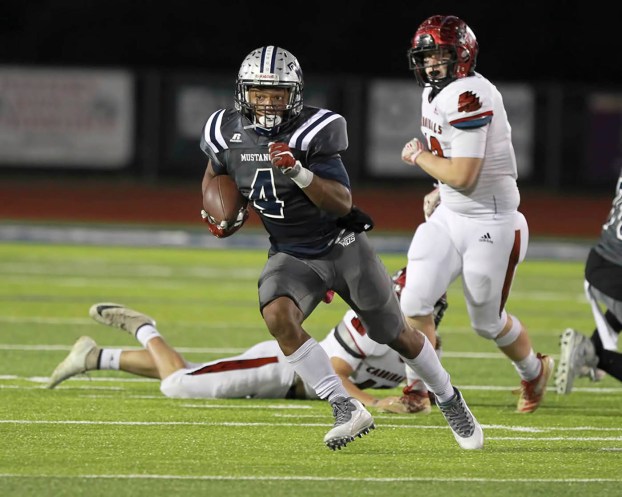 The Dave Campbell’s Texas Football Magazine recently released their preseason state polls for each football classification and the West Orange-Stark Mustangs chime in at No. 4 in Class 4A Division II.

The Mustangs, 8-1 in last season’s crazy covid pandemic campaign in which they won the District 11-4A Division II crown yet again, are once again the favorite to win another district title and advance far into the postseason.

There are so many familiar programs in the top 10. In fact, while the Mustangs were rolling to four straight Class 4A Division II State Championship Game appearances, including state crowns in 2015-16, they have faced all of the other nine teams ranked this year in postseason action since 2014.

State powerhouse Carthage is ranked No. 1 again after yet another state title last season.

Gilmer is No. 2 while Wimberley checks in at No. 3.

The Mustangs had made the 4A Region III Regional Finals nine straight years since long-time coach Cornel Thompson took over the program in 2011 as last year was the first time they had not accomplished that feat during a tremendous run.

WO-S will look to make its mark with 14 starters returning this season, nine on offense and five on defense.

The Mustangs have key weapons coming back on offense in the forms of all-district running backs Elijah Gales and Jamaal Shaw along with receivers Jadon Jones, Dontrey McClain and Jailen Brown. The key is going to be able to find someone to step in at quarterback as two-year starter Jerren Terrell has graduated.

The offensive line has plenty of experience with All-State selection Demetrius Hunter along with Bryson Jordan, Andrew Wilson and David Heard.

The defensive should be sparked by the likes of defensive ends McLain and Jailen Brown along with Carmello Jones and Jordan at tackle.

Gales and Quinton Walker look to shine at linebacker while Jadon Jones is back at safety after making all-district the past two seasons.

The Mustangs have a stout non-district schedule again as they open non-district with a date at Nederland Aug. 27 followed by LC-M (Sept. 3), Jasper (Sept. 10), and at Newton (Sept. 17).

In Class 3A Division II, the Newton Eagles are ranked No. 5 as they look to continue to be dominant in the small-school ranks.

The West Orange-Stark Mustangs check in at No. 4 in the preseason Class 4A Division II football poll by Texas... read more