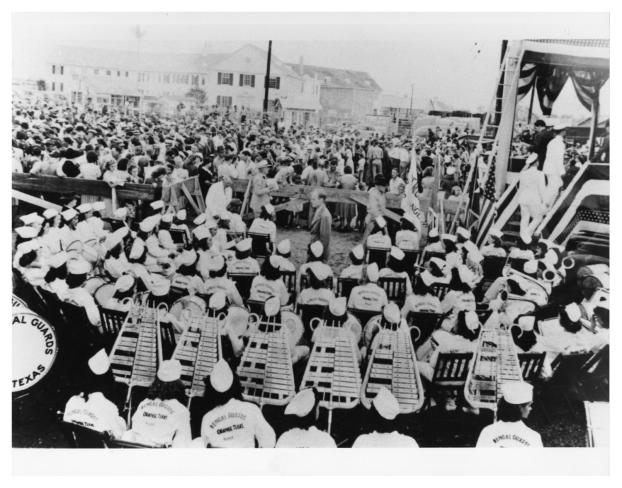 Photo courtesy of The Portal to Texas History Photograph of a performance of the Bengal Guards, the award-winning all-female drum and bugle corp of Orange High School.

What Made Orange Great: Stark: I give you America’s Own, The Bengal Guards

When Lutcher Stark introduced the drum and bugle corps from Orange at a performance, he always said the same thing: “Ladies and Gentlemen, I give you America’s Own, the Bengal Guards.”

He persuaded Mrs. L.W. Hustmyre who had organized the Red Hussars to leave that group and come to Orange and form a similar drum and bugle corps. Stark also hired Lewis R. Gay, the former head of the Port Arthur American Legion Drum and Bugle Corps to assist Mrs. Hustmyre in Orange.

The first girls joined the Bengal Guards in 1935 and began to learn to march. The marching was done at an incredible 175 steps per minute. In February 1936, the girls were given their first instruments. At that time there were drum and bugle corps at Thomas Jefferson High School in Port Arthur, the Greenie Cadets at South Park High School in Beaumont, the Goose Creek Ganders and the Lee Brigadiers at Goose Creek and Lee high schools in Baytown.

On Thanksgiving Day that year, the Guards performed at the halftime of the University of Texas and Texas A&M football game. This was the first time a high school group had been allowed to perform in a halftime show at Memorial Stadium.

In 1937, the group increased membership to 30 and continued to preform at football games and march in parades.

On March 8, 1938, the Guards performed at the opening ceremonies for the opening of the new bridge at Deweyville. In April 1938, the marching group increased to 58 members, a drum major, two junior drum majors, three flag bearers, four bell lyre players, twenty snare drums, four bass drums, four cymbals, and twenty buglers. April 16, that year, the corps performed at Stuart Stadium in Beaumont at the opening Texas League baseball game between the Beaumont Exporters and the Shreveport Sports. Beginning June 9, there was a summer camp of instruction led by Colonel George E. Hurt, the director of the band and orchestra at the University of Texas. Hurt was assisted by Frank Hubert who later became music director for the Guards and then became director of the Lutcher Stark Band of Orange High School.

In 1938, the corps also performed at fairs, music festivals, and led a parade for Governor W. Lee O’Daniel of Texas. When Elanor Roosevelt, First Lady of the United States, paid a visit to Beaumont the Bengal Guards served as her honor guard.

In early 1939, the Gem theater showed eight reels of the performances of the Bengal Guards. All 95 members learned to play the “French harp.” They began the “Company Front”, marching 84 abreast the length of the football field.

In 1940, the Guards were invited to Chicago to march at the Chicago Tribune’s 11th Annual Chicgoland Music Festival. At the music festival they performed at Soldier’s Field before an audience estimated between 80,000 and 90,000. After their performance they were the subject of a three-page article, with pictures, in Life Magazine. They were invited back the next year.

The Guards also received an invitation to march at the Rose Festival in California. On October 23, Mrs. Hustmyre resigned as director of the Bengal Guards. At the year’s end the Guards performed at the Sugar Bowl in New Orleans.

The Bengal Guards performed at launchings of ships at the shipyards in Orange starting with the launching of the U.S.S. Aulick, the first destroyer built in Orange in 1942.

Frank Hubert had become director of the guards following Mrs. Hustmyre’s resignation. In 1944, he entered military service and Stark took over control of the Bengal Guards and the Bengal Lancers, the high school band. In the summer of 1944, Stark turned control of both groups over to the Orange Public School System. The Bengal Guards were now part of the music department of Orange High School, it was the end of the Guards as a separate marching entity.

The girls who had been part of the Guards during their time as a special group felt truly fortunate to have had the opportunity and experiences they had. They had the best music education and instruments that were available. Stark had gone to great lengths to see that all girls were treated alike, regardless of social or financial station. He gave them identical travelling clothes of white jumpsuits. All the girls had matching luggage. Stark even gave each girl the same amount of spending money for their trips and told them to go have a good time, to shop, and “buy something nice for your momma”. They travelled on chartered trains and private busses. He provided everything at no cost to any of the girls. The only thing he asked was that they put forth their best effort and conduct themselves as ladies.

The only price the girls paid was to work hard. They practiced five days each week with the exception of July. No girl who was a member of the Bengal Guards in those early years had any objection for the amount of work they had to do in return for the benefits and recognition they received.

The Bengal Guards only existed as a solo performing drum and bugle corps for eight years, but the effect they had on the history of Orange has been profound, and a matter of pride for the girls who were members of the Bengal Guards.

In 1958, the Bengal Guards and the Bengal Lancers were merged into one band at the high school which had been named Lutcher Stark High School in 1940.

Uplifting others through one person at a time

Anita Scott, founder of One Soul at a Time Ministry, usually visits nursing homes and neighborhoods opted to extend the... read more