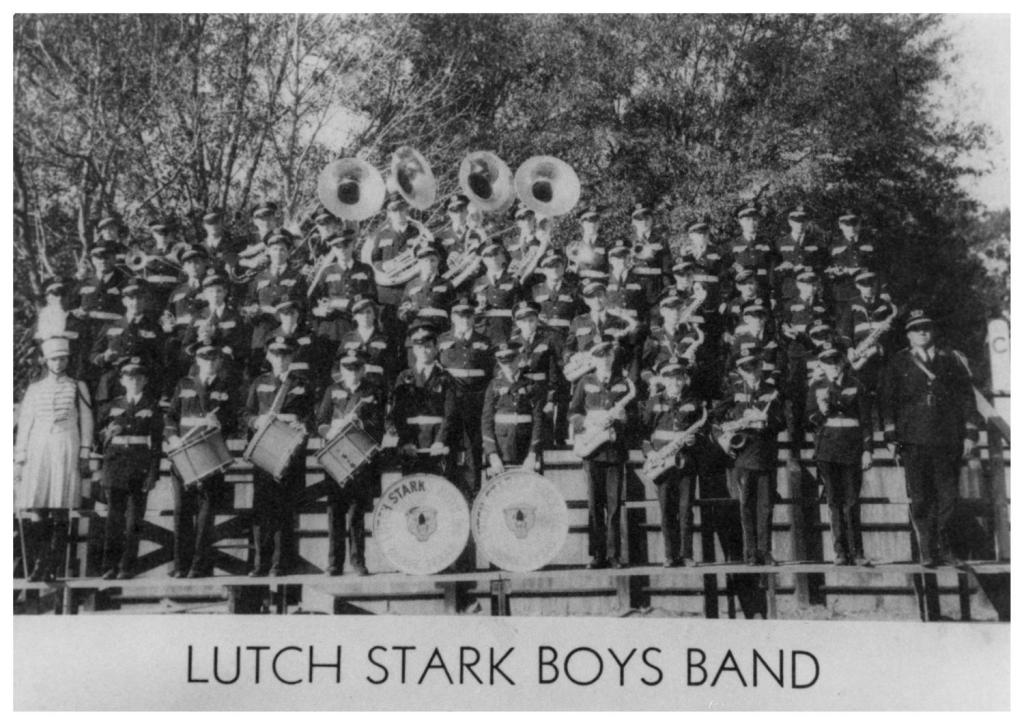 Photo courtesy of Portal to Texas History Photograph of the Lutcher Stark Boys Band. They are standing on the bleachers, wearing their uniforms and holding their instruments.

Lutcher Stark was a man who had many interests, two of which were young people and music. He was a graduate of the University of Texas and gave back to that institution in several ways. He loved the Longhorn band and bought the first uniforms for that band. There is also a story that he was the one who named the Longhorn as the mascot of the University.

One of his interests that possibly had impact on the largest number of young people in Orange, and may be one of his least remembered, was his formation of the Lutcher Stark Boys Band.

In 1925, Stark was teaching a Sunday school class at the Presbyterian church in Orange. His class consisted of boys from age 12 to 16. Stark wanted to find something that would attract the boys in that age group to Sunday school. His first effort was to form a Boy Scout troop at the church. That was not too successful because any boy could join Boy Scouts without being a member of the Sunday school class.

Stark had helped to establish the band at his alma mater, the University of Texas. The idea occurred to him that a band may attract boys to his Sunday school class.

The church had hired a young associate pastor, the Reverend S. E. Ayres. Ayres had once been a band leader and had the ability to assist Stark in forming a band. Membership in the band was only available to those who attended Sunday school. Stark had formed a drum and bugle corps with the Boy Scout troop, he reformed it into the Lutcher Stark Boys Band, and made Sunday school attendance a requirement for being a member.

In five months, there were 55 members of the band and they had added several brass instruments to the former drum and bugle corps. Eventually Ayres had worked up a well- balanced band with 72 members. The members were expected to attend Sunday school regularly. Fine instruments were furnished for those who were willing to work to learn music and perform with the band. Stark felt that the boys would feel a degree of responsibility if they paid a portion of the cost of their training. For those that were able to pay, he asked them to pay 1/3 and he would pay 2/3 of the cost of the lessons. The band was charged a group rate for the lessons. If a boy could not afford to pay, he got his lessons at no cost.

The instructor was Professor J. Buchanan, an experienced band instructor. He taught private lessons and had a studio furnished by Orange High School.

The band was so successful that after only 10 months Ayres decided that he would set up a tour of Central and Southwest Texas. His objective was to take the band to the Presbyterian Young People’s Conference at Kerrville. He wanted to give the boys an outing and to demonstrate the use of a boy’s band in promoting Sunday school attendance.

The band traveled in four motor buses that were outfitted for the comfort of the band and for convenience. The buses were painted Orange with the band’s name painted prominently on the sides of each bus. Stark had purchased white uniforms for the band, trimmed in Orange.

The band’s first appearance was at the University of Texas. They were so well received that they were invited back later for a special program at Memorial Stadium. They appeared on their second visit with The Old Gray Mare Band, The Ben Hur Shrine Band, and The Austin Municipal Band.

While on the trip they gave concerts at San Antonio, Medina Lake, San Marcos, New Braunfels, Houston, and Beaumont.

By 1937, the band had grown to 100 members. A drum and bugle corps had been formed for girls, and they had headquarters in the new band hall and gym at Orange High School. The first appearance that year was at the football game between Orange and Houston. Miss Mary Alice Ingram was the drum major, Rudolf “Bubba” Voss was the solo cornetist. At half time, the girls drum and bugle corps, named the Bengal Guards, gave an impressive performance.

The next year, 1938, Col. George E. Hurt, director of the University of Texas band, came to Orange to give music lessons to any boy or girl that wished to partake of his lessons at no cost.

After his sessions of lessons concluded, a crowd estimated at over 500 attended a concert at Howell Stadium. The Lutcher Stark Boys Band and the Bengal Guards performed under the direction of Col. Hurt and Mrs. L. W. Hustmyre. It was announced that Frank Hubert would become the director of the band. Hubert was a recent graduate of the University of Texas and had been an assistant director under Col. Hurt.

The band continued for two more years. In 1940, it became part of the music curriculum for the Orange school system. The band was renamed the Bengal Lancers and continued to perform under the standards set by Stark and Ayres.

Several former band members either played in bands or formed their own. Rudolf “Bubba” Voss became a member of the United States Army Air Force Band in World War II. After the war, he played with various dance bands, then went on to a long career playing with circus bands.