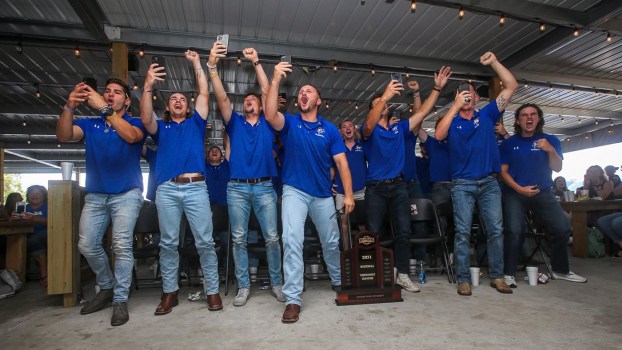 Photo courtesy McNeese SID The McNeese State Cowboys celebrate after they found out they were going to compete in the Fort Worth Regionals.

Cowboys head to Fort Worth Regional to face TCU

LAKE CHARLES – After rolling through the Southland Conference Tournament with a 4-0 mark and capturing its second consecutive title, the McNeese Cowboys have been selected to play in the Fort Worth Regional and will go up against No. 6 national seed TCU on Friday night at 6 p.m. on ESPN3.

The other game in the Fort Worth Regional will see No. 3 Dallas Baptist versus No. 2 Oregon State Friday afternoon at 1 in the double-elimination tournament. The tournament is scheduled to run through Monday with the winner to play the champion of the Columbia (South Carolina) Regional in the Super Regionals.

“Going to TCU, it’s exciting,” said all-conference second baseman Nate Fisbeck. “Obviously the goal is to go in there and win it but regardless, we’re getting McNeese on the map.”

Fisbeck is one of 12 seniors and 15 players who played on the 2019 team that went 0-2 at the Nashville Regional and losing both games by one run.

“That’s exactly why we came back,” he said. “Losing in the Vandy regional last time, to go 0-2 in that it was a little bit disheartening. To be able to be back this year, hopefully we can change that and make a run.”

Head coach Justin Hill has led the Cowboys to three championships in five years (2017 regular season title and tournament championships in 2019 and 2021) and is excited about the opportunity, especially with everything he and his team have had to overcome this season.

“I’m glad we’re going anywhere,” he said. “We get to play the host team right out the gate. It’s going to be a great atmosphere. It’s one of the best places you can go to. We have a tall task ahead of ourselves against the national seed and against the other teams that are in there. We’re ready to go.”

Dallas Baptist posted a 37-15 record this season and won the Missouri Valley Conference Tournament title in four straight games. The Patriots are making their 10th appearance in the postseason and seventh straight.

Oregon State (34-22) is making its 20th appearance in the regionals and its second NCAA visit to TCU in postseason play. The Beavers have made seven College World Series appearances and are three-time national champions (2006, 2007, 2018).

McNeese will be playing TCU for the first time in school history. The Cowboys are 1-6 vs. Dallas Baptist with the last meeting in 2011 and are 1-0 vs. Oregon State with that game played in 1991 and McNeese winning 6-5 in 11 innings in Lake Charles.