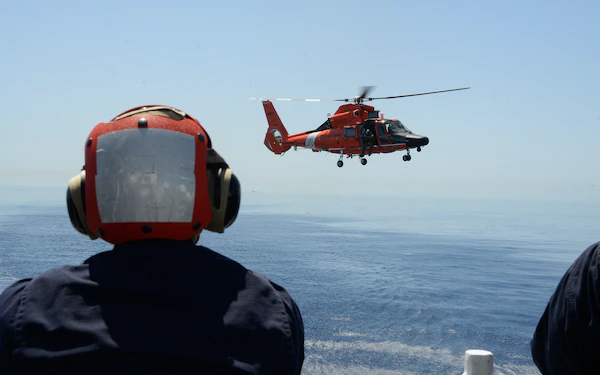 “By operating with Sixth Fleet, we expand the Coast Guard’s global reach and advance our Nation’s Tri-Service Maritime Strategy,” said Capt. Timothy Cronin, commanding officer of USCGC Hamilton. “This deployment also reinforced our commitment to freedom of navigation in international waters while building capacity and partnerships with nations that have shared interests and threats in the maritime domain.”

After departing North Charleston, South Carolina, on February 28, the crew of Hamilton stopped in Puerto Rico and then headed toward Rota, Spain, with two Sentinel-class fast response cutters, USCGC Charles Moulthrope (WPC 1141) and USCGC Robert Goldman (WPC 1142) in the Trans-Atlantic leg of the fast response cutters’ 9,000-mile voyage to homeport in Bahrain and service at Patrol Forces Southwest Asia.

After escorting the cutters and departing Spain, Hamilton then visited Italy, Georgia, Ukraine, and Malta. The crew conducted various operational exercises with the maritime components of each country and forces from Turkey, Romania, and Bulgaria.

Since leaving the Black Sea on May 14, Hamilton’s crew visited Valletta, Malta, and conducted engagements at sea with the armed forces of Malta. They also made a brief logistics stop in Rota, Spain, on May 23. Hamilton transited out of the Mediterranean Sea, concluding the crew’s recent operations in Sixth Fleet’s area of responsibility, May 24.

“The relationships we build are fundamental for establishing maritime safety and security worldwide,” said Lt. Cmdr. Taylor Kellogg, operations officer of USCGC Hamilton. “Working together with our NATO Allies and partners, we advance the rule of law on the sea, ensuring free and open access to the maritime domain.”

The U.S. Coast Guard, as demonstrated by this deployment, is a welcome presence and critical contributor to maintaining maritime safety, security, and stability in the Black Sea and the Mediterranean. Hard-earned and long-lasting partnerships in the Black Sea and the Mediterranean give the Coast Guard unique access to vital partners. These efforts build unique partnerships thanks to a broad suite of specialized maritime capabilities, competencies, and authorities. The U.S. Coast Guard multi-mission mandate as a law enforcement agency, a regulatory agency, and a military branch makes the Service’s comparative advantage unique and unparalleled.

The U.S. Navy and U.S. Coast Guard operate forward, from the littoral to the open ocean, ensuring stability and open sea lanes across all maritime domains. U.S. Coast Guard operations in U.S. Sixth Fleet demonstrate the Service’s commitment, flexibility, and capability to operate and address security concerns throughout Europe and Africa.

Master Gardeners: More on why are my tomato leaves turning yellow?

(Editor’s note: This is part two of a two-part series) By Laura Muntean Texas A&M AgriLife Extension Service from the... read more