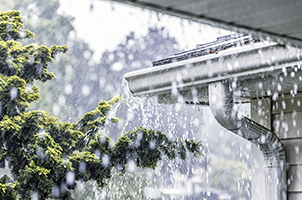 OP-ED: Story Over a Cup: I think the rains are my fault

So, about a week ago I did a thing.

We installed a new pool. I was happy, the thing went up with no problems. Then filling it up was a breeze followed by getting the pool ready for use.

But I wasn’t done. I felt manly. I felt like I could conquer the world.

So, I worked in the yard. We have it mowed, so all I did was some landscaping and planted a couple trees.

I washed my truck.

I gave the dogs a bath.

I was on a roll, and apparently unbeknownst to me, was tempting the fates.

The rains came the next day. I could only stare at the pool from the carport.

My dogs ran in the mud, all to end up dirtier than before the rains.

And my truck was now growing some green stuff on it. I am no longer sure if my truck is originally blue or green.

So, if you are staring at your yard and see it filled with water, then you can probably safely say it was my fault it is flooding.

And today, with it being sunny, I decided to check the pool. Maybe I could get in a swim once I check the chemical level.

It was a crystal-clear blue. The temperature was perfect.

Well, the pump is no not working.

I am afraid to fix it for fear of a hurricane.

Well, on another note of doing things and fate causing the apocalypse. A good friend told me that she had set a personal record and that the end of the world was assured.

There went my plans of world domination.

But there is still Mars.

I can now picture Roswell attacking the Perseverance Rover and ripping off its tires.

Roswell will look triumphant for its cameras as horrified NASA engineers look on helplessly from their command center in Pasadena California.

He is already suiting up.

Michael Cole is a syndicated columnist that when he is not writing, he is plotting universal domination. You can follow him at www.storyoveracup.com

Dr. Kelty GarbeeExecutive Director of Texas Rural Funders How do you know if you live in the city or the... read more