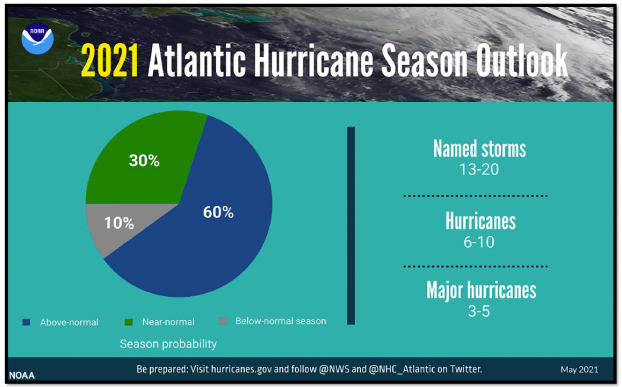 Flooding woes to persist across county

With above normal storm probability expected during the 2021 hurricane season, a storm is attempting to form in the Gulf and bring even more rain to an already saturated Orange County.

A historic deluge of rain this week unleashed serious flooding across portions of Texas and Louisiana, leaving roads underwater and leading to high water rescues. Some of the flood-stricken areas are among those still recovering from several tropical strikes during the record-shattering 2020 Atlantic hurricane season. AccuWeather forecasters say that the heaviest rain is likely over, but the impacts of this excessive onslaught of rainfall are likely to continue well into next week, according to AccuWeather.

And even though the risk of extreme rainfall is lower in the coming days, there is still the potential for some additional precipitation because moisture from the Gulf of Mexico will continue to flow into the region through the end of the week. Humid air will funnel into Texas and Louisiana around an area of high pressure that remains set up over the Southeast.

Recent satellite imagery suggests that a low-level circulation is forming associated with the mid- to upper-level disturbance over the western Gulf of Mexico. However, shower and thunderstorm activity remains disorganized. Environmental conditions are expected to be marginally conducive for development, and a short-lived tropical depression or storm could form before the disturbance moves inland over the northwestern Gulf coast tonight. Regardless of development, the system could produce heavy rainfall over portions of southeastern Texas and southwestern Louisiana during the next few days.  Additional information on the rainfall and flooding potential can be found in products issued by your local National Weather Service Forecast Office.

Early Thursday morning, a band of heavy rain and storms inundated portions of eastern and central Louisiana, an area that, up until Wednesday night, had missed out on the most persistent rain. However, those bands of rain are likely to shift back to the west again at the end of the week.

“The threat for rounds of rain will continue across western Louisiana and eastern Texas through Saturday before drier conditions prevail,” said AccuWeather Senior Meteorologist Tyler Roys.

Unfortunately, the area of heaviest rain through Saturday is likely to focus on the areas that have already been doused over and over again this week, AccuWeather forecasters say.

This week, widespread rainfall amounts of four to eight inches stretched from the Gulf Coast, in cites like Baton Rouge, Louisiana, and Houston, to as far inland as Dallas, Oklahoma City and Little Rock.

The intense rainfall led to flooding and forced high water rescues and closed roadways. At least five people were killed amid the flooding, according to Louisiana Department of Health.

The cities of Beaumont, Texas, and Lake Charles, Louisiana, have been among the hardest hit, and both cities picked up more than 14 inches of rain since Sunday.

In fact, Lake Charles has already had the city’s third wettest May on record after this week’s rain. The unrelenting wet weather this week added to the string of extreme events that have affected the city in the past year.

Another two – four inches of rainfall could be possible in this area through Saturday, exacerbating the ongoing flooding disaster.

More flooding of roadways, especially those near waterways, is expected to continue. Forecasters and officials urge motorists to avoid driving through flooded roadways, and follow the guidance of “turn around, don’t drown.” The additional rain will also push up water levels of rivers and streams.

After Saturday, the weather forecast is likely to improve, but not all of the storm’s impacts will dwindle.

“As we end the weekend and go into early next week, showers and thunderstorms will fire up, especially in the afternoons, but will not be as constant as what occurred this week,” Roys explained.

Roys also added that, given how saturated the ground is already, just a quick downpour could lead to flooding more easily.

The showers and thunderstorms are likely to help keep temperatures near or just below normal, unlike in the Southeast, where temperatures could hit 100 degrees for the first time this season.

Maybe you registered for Southeast Texas Alerting Network (STAN) and have since moved or started a new job. Now is... read more