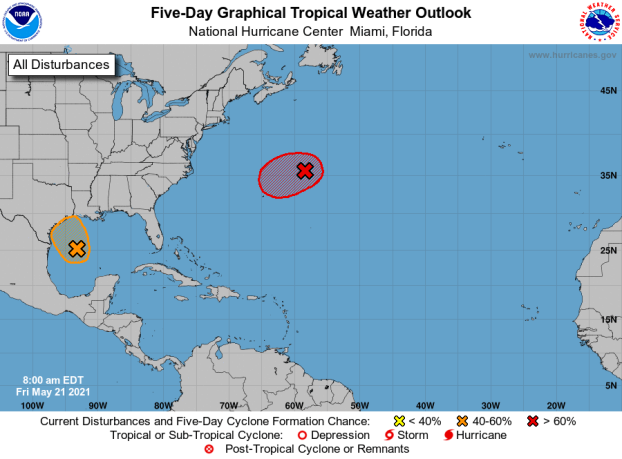 Storm possibly forming in the Gulf

The National Hurricane Center has increased the chances for tropical development in the western Gulf of Mexico to a medium 40%. A low level circulation has now formed. It will make landfall tonight along the upper Texas or southwest Louisiana coast, possibly as a depression or a storm.

The main impacts for our region continues to be the heavy rain and flash flooding, as well as minor coastal flooding during high tides.
The system out in the Atlantic still has a high 90% chance for developing into a sub-tropical cyclone, but it will remain out in the Atlantic and not affect us.

Recent satellite imagery suggests that a low-level circulation is forming associated with the mid- to upper-level disturbance over the western Gulf of Mexico. However, shower and thunderstorm activity remains disorganized. Environmental conditions are expected to be marginally conducive for development, and a short-lived tropical depression or storm could form before the disturbance moves inland over the northwestern Gulf coast tonight. Regardless of development, the system could produce heavy rainfall over portions of southeastern Texas and southwestern Louisiana during the next few days.  Additional information on the rainfall and flooding potential can be found in products issued by your local National Weather Service Forecast Office.