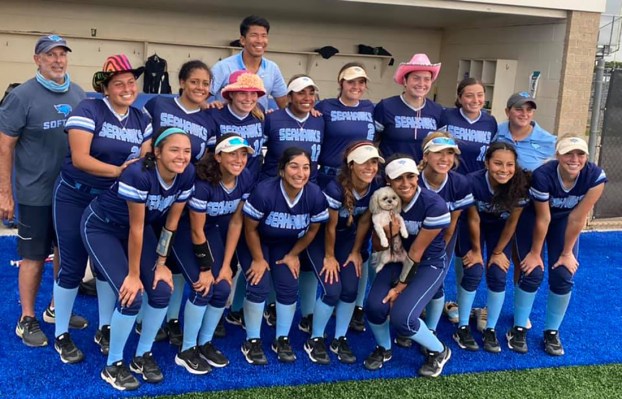 LSCPA finished as the runner-up in the NJCAA Region 14 South Zone Tournament after sweeping through the bracket to meet San Jacinto College-South in the championship game Monday afternoon at Sterling High School in Baytown. The Coyotes, winners of the regular-season title and the tournament No. 1 seed, advances to play in the NJCAA national tournament in Yuma, Arizona later this month after a 7-2 win over Lamar State.

“We’ve been on the verge of this kind of success all season,” LSCPA Head Coach Vance Edwards said. “This weekend was the culmination of everything we knew could happen with this team.”

Gabby Tims, a former West Orange-Stark standout, had a superb freshman season with the Seahawks.

The Seahawks, coming into the rain-soaked tournament as the No. 4 seed, reached the championship round by beating Galveston College, 5-2, Alvin Junior College 4-2, and Galveston again, 8-2, to reach Monday’s semifinal round against Blinn College.

That Seahawks’ 1-0 semifinal win vs. Blinn went into the bottom of the fifth inning before LSCPA finally managed to score what would be the decisive run.

Leeann Hinojosa got on base with a one-out single and later came home when Cameron Niedenthal doubled to the center field wall. The Seahawks managed five hits in the game with Niedenthal and sophomore Savannah Trahan each picking up a double.

“The win against Blinn College was one of the best efforts by a team I’ve ever seen,” Edwards said. “Blinn (the tournament No. 2 seed) gave us everything they had and we came away with a really satisfying win. All we wanted when we got to this tournament was the chance to play for the championship. Blinn stood between us and that game. We weren’t going to miss out on that opportunity.”

San Jacinto College-South came into Monday afternoon’s championship game without a loss while LSCPA had fallen to the Coyotes on Friday for its first loss of the double-elimination tournament.

The Coyotes stopped the Seahawks 7-2 in the championship game but were limited to just six hits by Niedenthal who threw 12.1 innings over the two games Monday for the Hawks. Just two of those seven San Jacinto runs were earned as Niedenthal had two strikeouts and two walks in the effort.

At the plate, Niedenthal had an in-the-park two-run home run in the sixth as she chased home Maylin Louvier, who had reached on an error to start the inning.

Niedenthal, a freshman, made her bid for an all-tournament spot, pitching 33 innings, allowing 26 hits and just six earned runs in five appearances in the circle. At the plate, she went 6 for 19 with three home runs, two doubles and eight runs batted in.