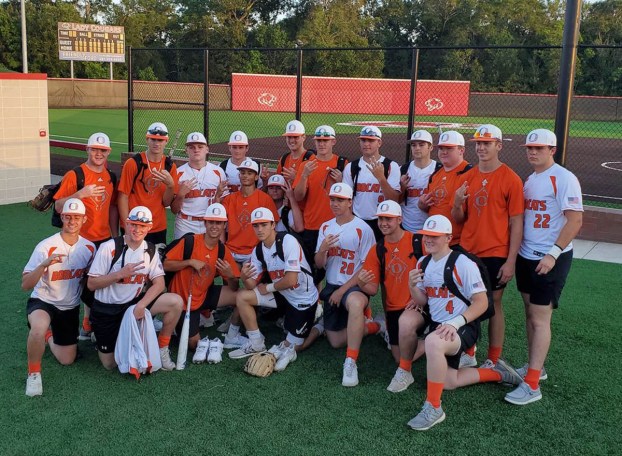 CROSBY – The Orangefield Bobcats took care of the Sealy Tigers 10-1 at Crosby High School on Friday evening to sweep their Class 4A Region III Area Round series. Bobcats took care of business in game one 2-0 and this game, securing their ticket to the third round of the playoffs with this big win.

The Bobcats will face Hardin-Jefferson in the Regional Quarterfinals next week.

Tyler Eaves would get the start on the mound for the Bobcats. He had a rough first inning giving up a quick run to the Tigers, but after that he would settle in and perform well for the Bobcats late into the game. Eaves would go the distance and get the win, going six innings, allowing four hits, two walks and had seven strikeouts while giving up just one run. He had a couple frames where he struck out the side, but for the most part, he was letting his defense take care of business in the field.

The 22-4A champion Bobcats (21-7-2) put together a massive inning in the bottom of the fourth after the first few innings were a tight race between the two teams. The Bobcats went through the lineup and then some, putting up seven hits, a walk, eight runs scored and five RBI’s recorded. The Tiger pitching sprung a leak and the Bobcats did a great job of piling on when they could.

The Tigers (11-20) get on the board first thanks to a misplay in the outfield. Dillon Dornak reached on an error from the Bobcats, just barely beating out the throw to first on a ground ball. Tyler Hennessey would connect with one sending a liner to center field, but an error from an outfielder would allow Hennessey to get to third and Dornak to score from first base as the Tigers took an early 1-0 lead after the top of the first inning.

The Bobcats struck back with some offense of their own in the bottom of the third inning. Kamryn Henderson would start it off with a big triple to left field down the line. Logan Gipson and Gunner Jones drew walks to load the bases. Kolbie Sowell took a pitch to the shoulder to bring in Henderson from third base. That’s all they would find as Sealy’s defense makes great plays as the game was tied heading into the fourth.

Te Bobcats gained complete momentum in the bottom of the fourth inning. Jason Bodin, Macoy Marze and Bryce Bergeron all singled to load the bases with no outs. Henderson would take a pitch to the elbow to bring in Bodin and keep the bases loaded. Tyler Shearin hit a sac fly to right and scored Marze on the play. Gipson kept it up with a shot down the right field line to score both Henderson and Bergeron from second and third base.

Sowell smashed a liner, to keep the inning alive, over shortstop, to score Gipson from third base. Jones would come in next after a wild pitch got past the catcher, letting him score easily from third base. Ryan Trahan drove in Sowell from second base thanks to a big hit and a Tiger’s error in the outfield. Bodin would get another hit down the line to score Trahan as the runs continued to rack up in the inning. The Bobcats put together a massive seven hits and eight runs in the bottom of the fourth to separate themselves in this one, going up 9-1 heading to the fifth inning.

Orangefield extended its lead in the bottom of the sixth inning. Sowell started things off with a single, followed by two walks from Trahan and Bodin to load the bases. Bergeron drew a walk and scored Sowell from third base. That’s all they would get but the Bobcats snared a 10-1 lead over the Tigers heading into the seventh inning.

The Bobcats advance to the next round of the playoffs after putting the finishing touches on this game. The dream to reach Austin is one step closer and the Bobcats are looking hungry for that next series win.

Here is the All-District 22-4A Girls Softball Team as selected by the 22-4A coaches: SUPERLATIVES MVP- Codie Sorge, Sr., Orangefield... read more