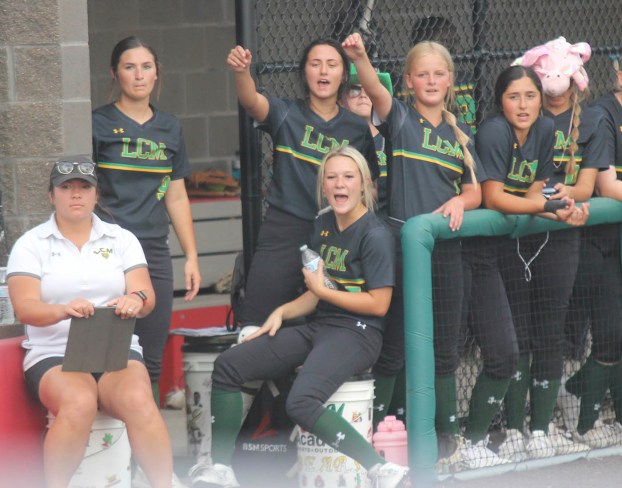 Van Wade/Orange Leader The LC-M Lady Bears cheer on their teammates in their battle with Huffman Thursday night.

Huffman had seven hits while the Lady Bears had six, but those three crushing blows were too much to overcome for LC-M.

Christin Haygood got both wins in the series for the Lady Falcons. She struck out three and walked two while allowing the six hits. In her 14 innings in the series, Haygood allowed nine hits while fanning 13 and walking two.

Huffman scored two runs in the top of the second.

Kristin Kruger got a one-out double off LC-M starter Cami Shugart and scored on a Taylor Byron two-run line drive homer over the centerfield wall.

The Lady Falcons scored their final five runs in the top of the third.

Tegan Boyd reached on an errant throw and with one out, Kylen Padgett drilled a two-run shot over the right centerfield wall.

After Hagen Pike walked, Haygood then stroked a two-run shot over the leftfield fence.

With two outs, Maddi Smith tripled off the wall in right and ended up scoring on a passed ball to make it 7-0.

The Lady Bears missed three strong opportunities to get on the board.

In the bottom of the third, Rhylan Wilson was struck by a Haygood pitch with one out, went to second on a passed ball and to third on a Karson Friar single to right. Friar wrapped up a tremendous senior season by going 3-for-3. Haygood got out of it by getting Madeline Stephenson to fly out and then struck out Shae Fontenot.

LC-M left the bases loaded in the bottom of the fifth.

Jascelyn Cook drew a leadoff walk and Friar roped a one-out single to shallow left. A Stephenson groundout moved the runners over and Fontenot drew a walk to load them up. However, Frenzel laced a hard shot that looked like it was going to score at least two runs but Huffman second baseman Padgett made a tremendous catch as she was at the right spot at the right time.

In the bottom of the sixth, Shugart, who was 2-for-3, and Ansley Moore each slapped one-out singles but Haygodd got out of it with a flyout by Cook and a groundout by Wilson.

Friar had a leadoff single in the bottom of the seventh but was thrown out at second trying to stretch it into a double.

Huffman clips Lady Bears in Game One; Game Two in BC Thursday

CROSBY – The Huffman Lady Falcons captured Game One 4-1 against the Little Cypress-Mauriceville Lady Bears Wednesday night in their... read more