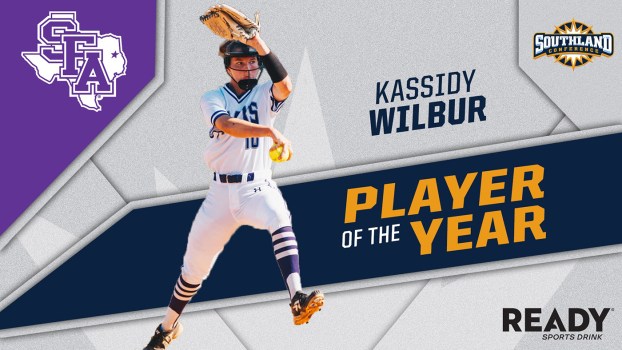 BC grad, SFA ace Wilbur named SLC Player and Pitcher of the Year

In addition to Wilbur and Govan, five other Ladyjacks were recognized as part of the Southland All-Conference Teams. Bryana Novegil (2B) joined Wilbur and Govan on the First Team, making the second All-Conference appearance of her career, while Mackenzie Bennett (DP) was also named a First Team selection. Gaby Garcia (UTL) and Camryn Middlebrook (SS) were chosen as Second Team honorees for their first league nod, while Alex Hedspeth (3B) was selected to the Third Team.

Wilbur,the 2017 and 2018 Orange Leader Female Athlete of the Year, left no doubt in the minds of the voters by putting forth a stellar 2021 regular season that has personally etcher her name in the SFA record books and put her on track to own several other records when all is said and done. The right-hander from Bridge City, Texas has posted a 29-4 record across 40 appearances (31 starts), with 21 complete game efforts and 13 shutouts. Her 0.86 ERA, 212.2 innings pitched, 253 strikeouts and .171 average for opponents are all conference-best marks, while she ranks first in wins (29), second in shutouts (12) and sixth in strikeouts (253) on the national scale. She was a four-time Southland Conference Pitcher of the Week selection and set the program’s single-season record for pitching wins with her 29th victory over the weekend.

NACOGDOCHES – What a banner season it has been for Bridge City native Kassidy Wilbur and her Stephen F. Austin... read more