After decades of protection and conservation efforts, Texas’ critically endangered Attwater’s prairie-chicken population is at its highest since 1993. Officials with the U.S. Fish and Wildlife Service and The Nature Conservancy in Texas estimate the current population is at least 178 birds. During the 2021 spring count, a total of 89 males were spotted performing breeding displays known as “booming” at the Service’s Attwater Prairie Chicken National Wildlife Refuge and on private ranch lands participating in grassland management activities as part of the Conservancy’s Refugio-Goliad Prairie Project.

This year’s count demonstrates a stark turnaround from near extinction in the wild just a few years ago.  Following the devastating effects of Hurricane Harvey, the 2018 spring count revealed only 13 males remaining in the wild.

“The remarkable recovery from an all-time population low following Harvey, to a population level not seen in almost 30 years, is a testament to the strength of the recovery program, and to the resiliency of the Attwater’s prairie-chicken itself,” said John Magera, Attwater Prairie Chicken National Wildlife Refuge manager. “This rebound demonstrates that these birds still possess the potential for the sort of population growth needed to make recovery possible.  It also provides new hope for the conservation partners that are actively engaged in helping this once iconic inhabitant of coastal Texas grasslands regain a foothold on the way to recovery.”

“While countless conservation initiatives and partners have been involved in these efforts, the potential for species recovery could never be possible without the engagement and critical support of individual landowners,” Feuerbacher added. “We’d like to take this opportunity to thank them for their partnership.”

More than a century ago, the Attwater’s prairie-chicken population was estimated to be up to a million birds in Louisiana and Texas. Because of habitat loss due to woody species invasion, and conversion to agriculture and development, the Attwater’s prairie-chicken disappeared from Louisiana early in the 20th century, and by mid-century was struggling to hang on in Texas.

It now occurs in the wild at only two Texas locations – the Attwater Prairie Chicken National Wildlife Refuge in Colorado County and a private ranch in Goliad County.

As early as 1937, officials with the Texas Game, Fish and Oyster Commission (known today as the Texas Parks and Wildlife Department) initiated conservation actions by closing the hunting season for Attwater’s and hiring noted conservation biologist Valgene Lehmann to conduct a life history study on the species.  Later the species was included in the first list of federally protected endangered species in 1967.  That same year, the World Wildlife Fund and the Nature Conservancy acquired ranch lands in Colorado County that would eventually become part of a National Wildlife Refuge bearing the bird’s name.  In the early 1990’s a captive-breeding program was also started to preserve as much genetic representation as possible from failing populations and to provide source stock for rebuilding wild populations.

But despite these efforts – and amidst several catastrophic weather events – the species remained on the brink of extinction until researchers made a breakthrough. 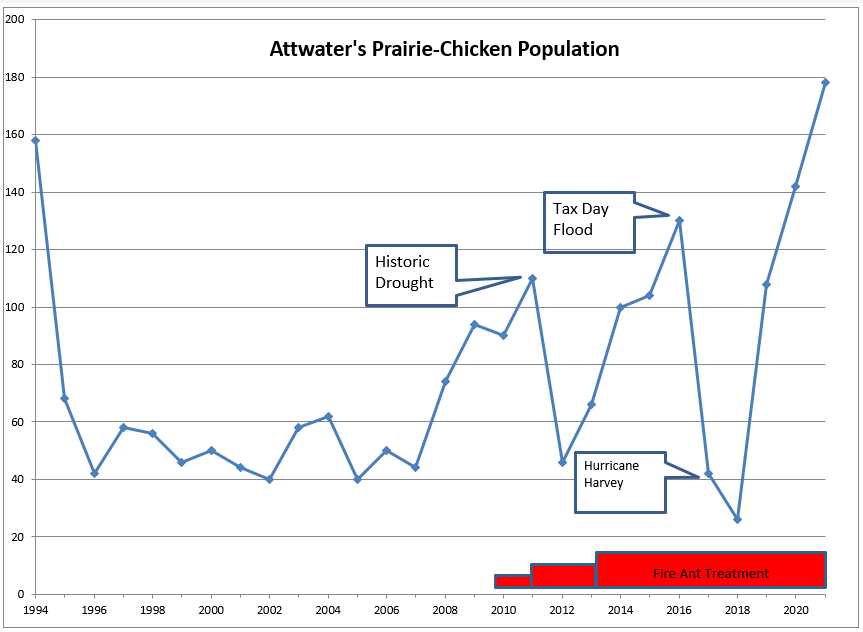 While populations still remain at risk from fire ants, extreme weather events and other threats, ongoing efforts aim to help the species recover in Texas.

Today, several captive flocks totaling about 150 birds are held at Fossil Rim Wildlife Center, the Houston Zoo, the Caldwell Zoo, the Abilene Zoo and now the Sutton Avian Research Center in Oklahoma. This year, the Service’s Southwest region distributed nearly $1 million in Recovery Challenge Grant funds to these facilities to support the next three years of Attwater’s prairie-chicken recovery.

Several organizations are also continuing to restore prairie grasslands infested by brush or otherwise made unsuitable for prairie-chickens. On the refuge, more than 10,000 acres of native coastal prairie are sustained through the use of prescribed fire, managed grazing, brush control and by planting native prairie seeds on former farmland. Additional voluntary habitat restoration occurs on private lands managed under the Safe Harbor Agreement and on TNC’s Refugio-Goliad Prairie Project, which is held by the Coastal Grazing Lands Coalition to protect several endangered species found in the area—including the Attwater’s prairie-chicken.

AUSTIN ─ For the 17th year in a row, Texas has again been named the Best State for Business by... read more