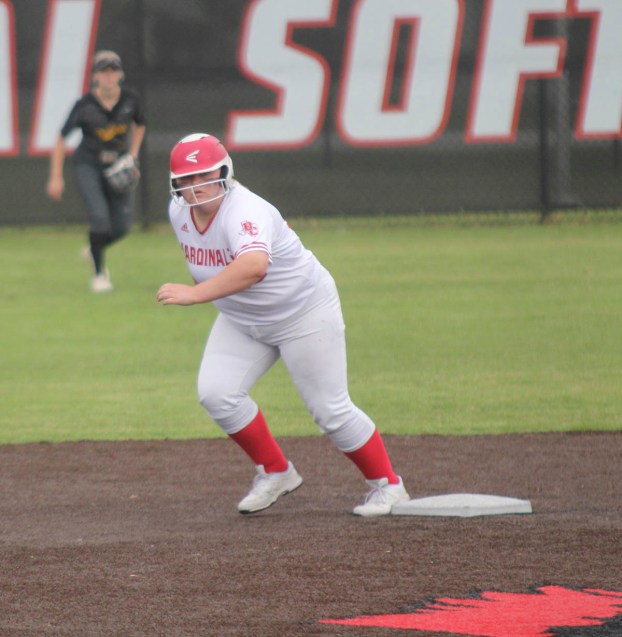 Van Wade/Orange Leader Bridge City's Madyson Melton stands up at second after she had a RBI double against Liberty.

Lady Panthers take out Lady Cardinals in bidistrict round

Kaci West got the complete-game win for the Lady Panthers as she scattered two hits while striking out 12 and walking four.

Liberty notched a run in the top of the first.

Jaylen Richard had a leadoff single and scored on a Mikaelah Burkland sacrifice fly to right.

The Lady Cardinals countered with a run in the bottom half of the first.

Makenna Carey drew a one-out walk and Marlee Strong had a nice sacrifice bunt to move her to second. Melton then stroked a West offering to deep left field for a RBI double.

Liberty grabbed a run in the top of the third.

Maci Beam had a one-out infield single and swiped second. West then roped a RBI double to center.

Slack had a two-out single and scored on a Richard single to center. Beam then hit a fly ball that was dropped and Richard darted in to score.

The Lady Panthers added two runs in the top of the seventh.

Burkland drew a walk and Hollie Thomas belted a shot to center and was able to turn it into a two-run inside-the-park home run.

The Lady Cardinals threatened in the bottom of the seventh.

Leah Jeffrey had a line drive single to left. Austyn Daniels hit into a fielder’s choice, forcing Jeffrey out at second. West then walked Jaslyn Jordan and hit Haley Munoz with a pitch to load the bases. West got out of the jam by fanning Amaris Larkin.

Lady Hawks roll past Lady Bears in Game One