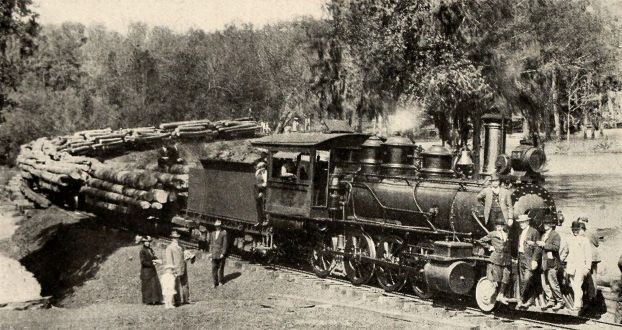 (Editor’s note: This is part one of a two part series on the history of sawmills in Orange.)

Orange had a history of being a sawmill town for 133 years. The virgin cypress and pine timberlands and the Sabine River combined to make Orange the ideal place for the lumber industry. Over time the trees and sawmills would create great wealth for some of the lumbermen.

In the late 19th and early 20th Century, it was said that Green Avenue in Orange had more millionaires than any other street in any similar sized town in America.

The first powered sawmill in Orange was built by Robert E. Booth in 1837. It cut, for the time, a remarkable 2,000 feet per day. The mill was powered by water.

Payne and Bendy built the first steam powered sawmill at the Narrows of the Sabine River in 1841 using the engine and boilers of a sunken steamboat. They sold the mill to Robert Jackson who tore the mill down and moved it to Orange.

In 1850, the only lumber industry in Orange recorded in The Products of Industry Census was Marvin Delano’s shingle mill. Delano processed by hand 300 cypress logs worth $300 and produced 576,000 shingles valued at $1,152. He employed three men, paid each $20 per month and one woman he paid $12 per month.

Dr. William Hewson built the Empire Mills on the Sabine River south of Orange in 1855. The mills cut 8,000 feet daily, employed 10 men and were said to be the best in the state.

On May 31, 1856, the mill was deliberately set afire by a Moderator’s posse of Orange Vigilantes. They believed two murderers who had killed a deputy sheriff were hiding in the mill. There was a $15,000 loss including the stacked lumber where the murderers were thought to be hiding.

W.C. Brazee and James Wood built a sawmill consisting of one circular saw and one upright saw in 1857. The mill was one of four near Orange that had a daily capacity of 3,000 to 4,000 feet per day. The other three mills were John Merriman, Robert Jackson, and R. A. Nyland and Company’s steam shingle mill.

In the year 1857, there were 6,120,000 shingles exported through Sabine Pass. Since there were no shingles reported as being cut in Beaumont, it is assumed that all the shingles were from mills in Orange.

The American Civil War made Orange County an economic wasteland. Three Confederate companies were enlisted and marched away to fight. A large number of the men never returned, lost to either battle or disease. Then, in 1865, a huge hurricane hit Orange and reduced the town to rubble, leaving only three or four houses standing. The 1879 census showed a loss of several hundred in population. It took Orange nearly a decade to recover from these losses.

A.T. Chenault and John McGehee built a sawmill at Orange in 1866. McGehee sold his interest to Chenault soon after the mill began operation.

Chenault converted the mill to a shingle mill and in 1867 he began operating a Muzzy upright shingle machine and averaged 10,000 shingles per day. Production increased to 15,000 per day and then to an astounding 20,000 per day.

He lost five sawmills to fire in Orange after first starting by buying two-thirds interest in the James Woods sawmill. He also lost five schooners loaded with finished lumber to storms. Gilmer kept rebuilding his mills, replacing his schooners, and acquiring new timberlands.

Gilmer died on a voyage to New York City in July 1906. One source said he lost a million dollars in fires, schooner wrecks and other disasters but was still able to leave a million dollar estate when he died.

David Robert Wingate was another pioneer Orange County settler and lumberman who lost five sawmills to fire, three of them in Orange.

Wingate built a new sawmill which began production in 1878. The mill cost $50,000 to build and had a daily capacity of seven railroad cars of finished product daily. In 1880, the new mill burned to the ground.

By May 1888, he had a new mill in operation. In 1890, a fire started in the boiler room and in 15 minutes had spread to the second floor. The planning mill survived as did some stacked lumber. This kept the loss to about $50,000. Wingate rebuilt the mill and started rice farming along with his lumber production.

A.K. Norris brought sawmill machinery from Chicago to Orange in April 1877 in search of new opportunities. In 1878, the A.K. Norris mill was said to be running “at full tilt.”

The Norris mill burned on November 18, 1888 and was not rebuilt.

Robert B. Russell bought the old Robert Jackson sawmill and converted the mill to cut 25,000 feet of lumber and 125,000 shingles per day.

The Russell mill ceased lumber production and manufactured only shingles throughout the 1870s. At the end of the fiscal year, 1880, production was reported as 10,000,000 shingles worth $25,000.

The Russell mill continued operation until June 1890 when it burned to the ground. It was not rebuilt.

Randy ‘Flipper’ Dolittle is known for giving his all when he starts a new piece of art. His medium is... read more