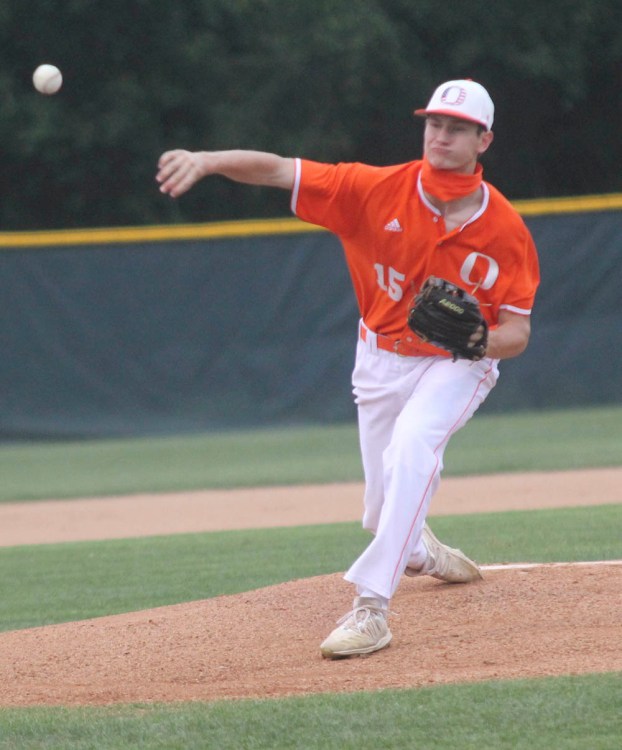 Bobcats down Vidor to snare 22-4A crown

ORANGEFIELD – The Orangefield Bobcats joined their co-horts, the Orangefield Lady Bobcats, as District 22-4A champions as they defeated the Vidor Pirates 7-3 to capture the crown as Orangefield won district diamond titles            in 24 hours time.

For the Bobcats (17-6-2, 10-2) offensively the whole lineup had a good night, but Tyler Washington played a crucial role in this game. He had a big single for two runs batted in in the bottom of the fourth inning, opening things up for the team and pushed them into a comfortable lead. Washington would go one for three with a single, two runs batted in, a walk and came across the plate two times himself on the night.

Reagan Hallmark would get the nod to start for the Pirates (10-16, 3-8). His early inning would be solid, but in the fourth inning the Bobcats found three runs to bust the game open. He would go five innings on over 100 pitches with six walks, five hits and three strikeouts with four runs given up. Hallmark would take the loss for the Pirates on the stat sheet, but he had a solid outing overall.

On the mound Bryce Bergeron got the start for the Bobcats. He would go the distance for the win in a decisive manner. He went all seven innings, giving up three runs, two walks, five hits and three strikeouts. Bergeron had an excellent night, using his defense to his advantage, letting them get some work in and save his pitch count. He was a big part of the win and is a big part of the Bobcats taking the district crown this season.

The Bobcats found the game’s first run in the bottom of the third inning. Washington took a pitch to the foot, and swiped second base to give the Bobcats their first runner in scoring position. Kamryn Henderson lined a single over the infield to bring in Washington from second base and score. A couple walks would load the bases, but the Bobcats wouldn’t get any more runs out of it but they took a 1-0 lead in the bottom of the third inning.

The Pirates answered back in the top of the fourth inning with some offense of their own. Cameron McCoy would start with a single, followed by a Bobcat error putting on Quinten Root and Bryce Munoz with a hard single to load the bases. Ty Vincent hit into a double play, but would score McCoy from third base. That’s all the Pirates would get, but they tied the game at 1-1 heading into the home half of the fourth inning.

The Bobcats busted open for more runs in the bottom of the fourth inning. Bergeron would help himself and start things off with a single, followed by a big double from Macoy Marze just over the third baseman’s head, putting runners on second and third base. Washington hit a single into the right-center gap to score both Bergeron and Marze from second and third base. Tyler Shearin connected with one up the middle, scoring Washington from second base. The Bobcats scored three to take a 4-1 lead over the Pirates heading into the fifth inning.

The Pirates answered with a few hits of their own in the top of the sixth inning. Tyler Grey and McCoy walked to start things. Vincent would hit into an error, scoring Grey. Easton Walker connecedt with a single up the middle to score McCoy in the next at bat. The Pirates took back two runs but still trailed the Bobcats 4-3 heading into the bottom of the sixth inning.

The Bobcats extended their lead in the bottom of the sixth, thanks to a few walks and a Pirate error. Kolbie Sowell, Marze and Shearin would all walk to load the bases with two outs. Logan Gipson hit a pop fly to right field, but the fielder would bobble the catch, letting all three runners come across to score.

The Bobcats will put a bow on the game and secure first place in the district with the win against the Pirates. Well deserved with how this season has gone for them so far, but the most important part of the season is the playoffs.

The Bobcats will have a little time before the playoffs start, but their eyes are set on a deep run.

OF, LC-M, BC all have softball playoff dates set