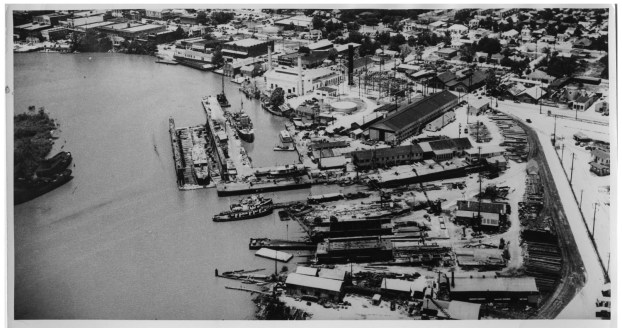 What Made Orange Great: Exploring the history of Orange shipbuilding

The history of shipbuilding in Orange goes back to 1859 when Samuel Levingston built a small shipyard and began building paddle wheel steamboats to be used on the Sabine River.

When the Civil War began, Levingston enlisted in Merriman’s Orange County Coast Guard and served until June 1865 when he was Honorably Discharged with the disbanding of the Marine Department of Texas.

He had been sent to New Orleans to build gunboats for the Confederacy and after his discharge he returned to Orange and began another shipyard to build paddle boats once again.

After Samuel Levingston retired, his son George took over the business.

Joseph Weaver had gained experience when he worked on a Confederate ironclad being repaired in a shipyard. Weaver came to Orange in 1892 and worked as a boatbuilder. He moved to Galveston for a short time but returned to Orange and entered into a partnership with George Levingston.

They started building barges for the Galveston Navigation District. The business was successful, but Levingston sold his interest in the company in 1912 to Ed L. Weaver. Levingston stayed on as general manager until the start of World War I when he moved to Morgan City, Louisiana. Later he returned to Orange and became part of Levingston Shipyards.

Henry Piaggio owned the National and the International Shipbuilding Companies. Both were headquartered in Pascagoula, Mississippi.

Piaggio’s National Shipbuilding Company would build more ships in less time than any other yard on the Gulf Coast. National Shipbuilding built 14 ships, each 225 feet long four and five masted barkentines. It was a massive accomplishment as each ship required as many as one million board feet of lumber.

The largest ships built entirely of wood to be used as cargo carriers were constructed by National Shipbuilding in the Orange yard. The S.S. War Marvel and the S.S. War Mystery were each 330 feet long with a 49 foot beam, or width, and a capacity of 4700 tons of cargo. Both ships were operated by the Cunard Steamship Company under the British Flag.

Some of the ships built in Orange were steamships designed by naval architect Theodore E. Ferris and referred to as “Ferris Ships.”

They were 281 feet six inches long and required a draft of 23 feet six inches when fully loaded. The beam measured 45 or 46 feet. Coal powered engines enabled the ships to be driven at about 10 knots.

The Orange yards built both wind and steam driven wooden ships, but the days of sailing ships was ending, and wooden ships were being replaced by steel ships as arc welding was coming into use.

When the war ended, Orange had a surplus of ships. Sixteen were built and awaiting final touches. They were unwanted and disposal was a problem. The Emergency Fleet Corporation had a total of 462 ships to dispose of. The EFC was asking for a price of $75,000 per ship, not including the cost of any machinery that may be needed installed. There were no buyers interested.

Twenty-six ships built in Beaumont that were incomplete at the end of the war were sold for $21,000. The cost of building the ships was in excess of 10 million dollars.

The most effective way to deal with the ships in Orange was to simply tow them downriver and sink them. They were towed to an area near the mouth of Conway’s Bayou where the water was deep enough to sink them and wide enough so they would not impede river traffic.

The wooden ship built in Orange which lasted the longest was the Nawtika. She was renamed the Admiral Bromley in 1938 and was bombed and lost in 1943.

The Argenta was the ship with the most interesting history. She was sold to Britain in 1922 and became the H.M.S. Argenta. After she developed problems with leakage, she was put into service as a prison ship and converted to hold 263 men, The Argenta was scrapped in 1925.

Shipbuilding in Orange went into a slump after the boom of World War I shipbuilding, until the beginning of World War II, when Orange shipyards would become the only shipyards on the Texas coast to build warships. There were other shipyards involved in building vessels for the war effort, but they built cargo ships.

Levingston’s contract was to focus on tugboats and other auxiliary vessels.

George Levingston had begun to make changes in Levingston Shipyard after World War I. In 1930 he bought five acres at Mill and Front Streets and moved the business from its original location at the foot of Moss Street. They survived the depression by incorporating. In 1939 Edward T. Malloy was hired as general manager.

Levingston’s first contract was for a 530 ton steel hulled tugboat “Tuscarora.” She was launched on December 13, 1941. Between 1941 and 1945, Levingston would build and launch a total of 160 vessels for the U.S. Navy and U.S. Army. The vessels included tugs, tankers, barges, and ocean going rescue vessels. Some of the vessels were built for the British Navy. Levingston built more tugboats for the war effort than any other shipyard in WWII.

At the end of the war, Levingston changed with the economic times and became a worldwide leader in the design, engineering, and construction of off-shore drilling rigs, jack-up platforms, and self-propelled drilling ships.

In 1964-65, Levingston received a unique contract: they were contracted to build three ferries for service at Staten Island, New York. One of the three, the John F. Kennedy is still in limited service today.

Levingston remained a privately owned company until 1977 when it was sold to Ashland Oil. The economic downturn took its toll and in 1982, Ed Paden, the president of Ashland Oil, bought Levingston and began phasing the company out of existence. Levingston closed in 1985 and one chapter of Orange shipbuilding history closed with it.

Consolidated Western Steel was a small shipyard in Orange. With the awarding of the Navy contract for the 12 destroyers, there was a crash program to expand the shipyard.

A combine known as Becthel-McCone-Parsons was given the contract to build the facilities and construction began in 1940. The first unit of the yard was completed in 1941 and Consolidated immediately began work on the first ships.

Employment began to increase until by the end of the war there were about 20,000 workers in the Consolidated yard.

The first ships laid down and launched were the Aulick, Charles Ausburne, Claxton, and Dyson of the Fletcher-class. All were launched in 1942.

After the end of the war, the yard reverted to fabrication and for many years was a division of U.S. Steel. The yard is still in operation today under new owners and doing various kinds of fabrication and construction.

Weaver had built wooden ships during the WWI period and still had some shipways from that era that could be used. At the start of the war there were only 245 workers in the Weaver yard. The yard needed to expand to handle the contract for the minesweepers and another contract in September 1941 for two subchasers.

The minesweepers were 136 feet long, the subchasers slightly smaller at 110 feet. The first minesweeper built was the YMS 66 launched January 31, 1942. Weaver would build 26 YMS ships along with two subchasers.

In 1975, the Weaver Family sold the shipyard. The name was changed to Weaver Shipyard and Drydocks, Inc. In the late 1980, the family found it necessary to foreclose on the buyers. They regained ownership until the yard closed some years later.

With the closing of the Weaver yard, another chapter of Orange shipbuilding history ended.

Conrad Shipyard was established in 1948 and is headquartered in Morgan City, Louisiana. The company designs, constructs and overhauls tugboats, ferries, liftboats, barges, offshore supply vessels and other steel and aluminum products for both commercial and government markets. Conrad provides both repair and new construction services at its five Gulf Coast shipyards located in southern Louisiana and Texas, including a location in Orange, Texas.