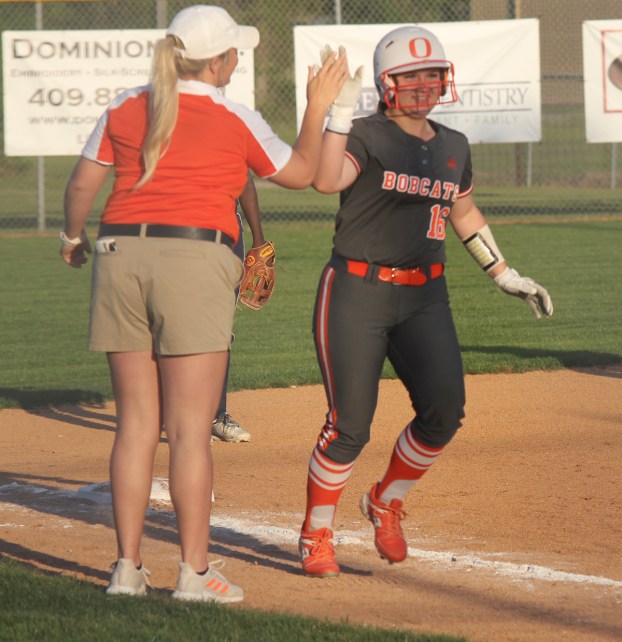 ORANGEFIELD – Blasting four home runs on the night, including two by Heather Mineer in the first inning alone, the Orangefield Lady Bobcats cruised past the West Orange-Stark Mustangs 19-1 in three innings on Senior Night in District 22-4A play at Lady Bobcat Field Tuesday.

Lady Bobcat senior Codie Sorge tossed all three innings for the Lady Bobcats as she scattered three hits while striking out six and walking one.

Ryden Stanfield got things going against WO-S pitcher Nataleigh Sims in the bottom of the first with a leadoff double to left. Emma Humplik made it 1-0 with a double to center. Humplik finished 3-for-3 with four runs batted in.

After Sorge reached on a fielder’s choice, Harleigh Rawls brought in Humplik with a single to left.

Mineer then stepped up and blasted a three-run homer over the leftfield fence to make it 5-0.

Humplik made it 15-0 in the bottom of the second inning with a solo blast over the centerfield wall.

The Lady Mustangs (7-18, 0-11) scrapped for a run in the top of the third. Ariel Farris led off with a single between short and third and Paris Overstreet got on with a fielder’s choice. With one out, Taliyah Washington smashed a RBI single to right.

T’era Garrett had WO-S’ other hit, a two-out double in the first inning.

Olivia Grant finished it off for the Lady Bobcats in the bottom of the third.

After South and Stanfield walked and Humplik was struck by a pitch, Grant ended it with a towering grand slam over the right centerfield wall.

Besides Humplik’s three hits, Rawls, Mineer and South each had two hits for the Orangefield attack.

The Lady Bobcats will visit Lumberton Wednesday in a game that was rescheduled due to bad weather last Friday and a sloppy Lumberton field. Orangefield will then venture to LC-M Friday for a huge game against the Lady Bears that could determine the outright 22-4A title.

The Lady Mustangs will wrap up their season at home Friday against Silsbee.

HUNTSVILLE – It was a banner day for the Little Cypress-Mauriceville boys golf team and senior Jack Burke Tuesday as... read more