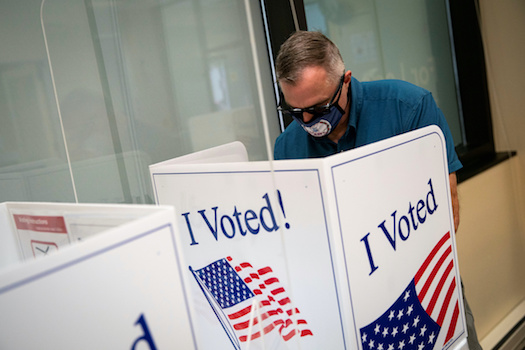 Photo courtesy of brookings.edu A package of sweeping changes to elections being considered by Texas lawmakers would prevent officials from mailing absentee ballot applications to voters.

AUSTIN, Texas — Texas is a big and religiously diverse state, but faith communities say controversial voting bills before the state Legislature will disenfranchise both rural and urban voters.
Texas Republicans last week advanced bills, House Bill 6 and Senate Bill 7, which would limit early-voting hours, prohibit drive-through voting and give partisan poll workers the ability to videotape voters at the polls.
Bee Moorhead, executive director of Texas Interfaith Center for Public Policy/Texas Impact, said many think the proposed laws are diversions from larger problems facing Texas, but she believes voter suppression is much more about the numbers of young people of color in Texas soon to be of voting age.
“Voter suppression in the current environment is not about distracting people from things that already happened,” Moorhead asserted. “It’s about a thumb on the scale of what could happen in the future.”
Republican lawmakers in Texas, much like their counterparts in Georgia, said the new voting bills are necessary to improve trust and confidence in the outcome of elections.
Joshua Houston, advocacy director for Texas Impact, told lawmakers at a recent House committee meeting House Bill 6 is so unclear, it appears members of his group could be breaking the law by assisting voters who seek help.
“Under the language, we would be felons for distributing mail-in ballot applications during a local ballot initiative or constitutional amendment election if we had taken a position for or against that measure,” Houston stated.
Moorhead argued voters have shown no intention of fraud, and shouldn’t have to jump through hoops to exercise their constitutional right.
“Faith communities look with deep suspicion on legislative proposals that exclude people from the process because we know exclusion in all of our scriptural traditions ends badly for the excluders,” Moorhead contended.
Gov. Greg Abbott has said he believes there was fraud in the 2020 presidential election, but doesn’t believe any occurred in Texas.
Monday, the Senate unanimously passed two election security bills: one requiring a paper record be created of every ballot that is cast, and another creating a ballot auditing system.

Mike LouviereAnd Now You Know By the end of the summer of 1951, there was turmoil in Calcasieu Parish that... read more