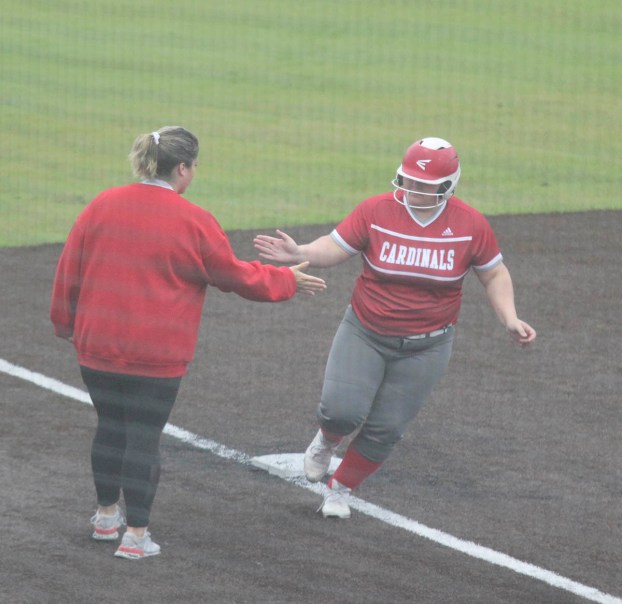 Lady Cardinals zip past Silsbee in 5

BRIDGE CITY – The Bridge City Lady Cardinals made quick work of the Silsbee Lady Tigers 13-0 in five innings to clinch a playoff berth out of District 22-4A.

Bridge City freshman Carson Fall worked all five innings, allowing just one hit while striking out seven and walking four while the Lady Cardinals got back-to-back home runs by Madyson Melton and Hannah Murchison in the first inning. Fall earned her 100th strikeout of the district season in the win.

The Lady Cardinals struck for four runs in the first inning.

Amaris Larkin started it with a leadoff walk and moved all the way to third on a Makenna Carey sacrifice bunt. Larkin then scored on a passed ball.

Austyn Daniels reached on an error at short and scored when Melton ripped a ball over the left centerfield wall to make it 3-0. Murchison then decided she was going to hit a solo home run right after that.

The Lady Cardinals tallied four runs in the third frame.

Melton had a leadoff double down the leftfield line. Leah Jeffery reached on a one-out walk and Fall drove in a run with a RBI single to center. Jaslyn Jordan made it 7-0 when she slapped a two-run single to right. Larkin then plated Jordan with a two-out single and Larkin later scored on a passed ball.

Jordan drew a two-out walk and scored on a Courtney Ball single to right and Ball eventually scored when Larkin reached on an error.

The Lady Cardinals capped it with a two-run fifth.

Kaylyn Dosch reached on an error at third and scored off a Daniels’ infield single. Daniels eventually scored when Murchison slapped a one-out single to shallow left.

The Lady Cardinals are currently in third-place in the 22-4A standings. Their last regular season game is next Friday at Lumberton.

22-4A tracksters that are heading to Regionals

Due to the cancellation of the Area Track & Field Championships of the District 21-4A and 22-4A teams due to... read more