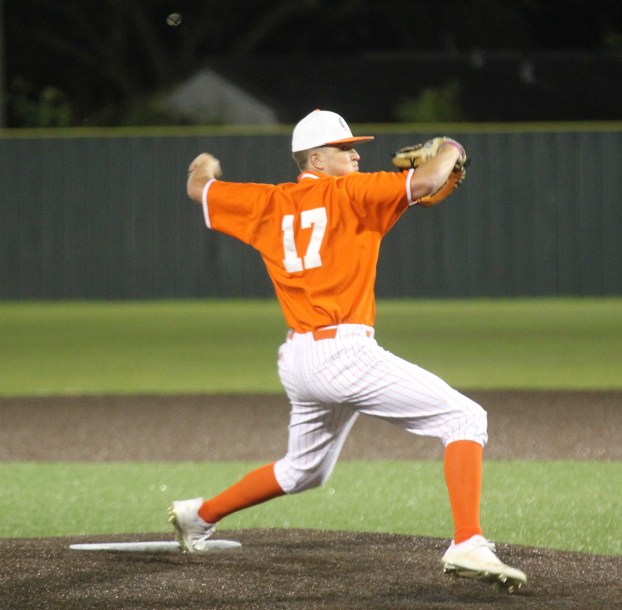 BRIDGE CITY – The Orangefield Bobcats took down the Bridge City Cardinals 2-1 in District 22-4A action at Chuck Young Field in Tuesday night that featured some tremendous pitching efforts from both sides.

Weather issues would move the game over to Bridge City instead of Orangefield, but the Bobcats (14-5-2, 7-1) were still able to act as the home team for this game.

Neither team could get much going offensively throughout the game, having to scrounge for hits and runs. Both starting pitchers, Orangefield’s Trent Eaves and Bridge City’s Sam Carpenter, utilized their defense and let them do the work for them with fly outs and ground balls, for mostly quick innings.

The Bobcats found the game’s first run in the fourth inning, but the first hit would come from the Cardinals (12-10-1, 4-4) in the sixth inning.

Jason Brodin got the win for the Bobcats on the mound. He would come in, in the closing role, and took care of business, getting two strikeouts and a flyout to shut out any chance for the Cardinals to score.

Offensively not much happened for either team, but the standouts for the game were Kolbi Sowell, who had the sole hit for the Bobcats, and McCoy Marze, who had the long sac fly and RBI to win the game.

The Bobcats took the first lead of the game in the bottom of the fourth inning. Kamryn Henderson would walk to lead off and advance to second base on a fielder’s choice hit by Tyler Shearin and got to third on a throwing error by the Cardinals. Gunner Jones hit into a fielder’s choice as well, but on the play Henderson would come in to score from third base. Without a hit so far, the Bobcats took a 1-0 lead heading into the top of the fifth inning.

The Cardinals found their run in the top of the sixth inning. Brice Swanton led off with a single, Carpenter reached on an error and Kade Benoit would walk to load the bases with one out. John Van Huis hit a shallow sac fly to bring in Swanton from third base to score. The Cardinals would leave two runners on base, but tied the game at 1-1 heading into the bottom of the sixth inning.

The Bobcats clutched it up in the seventh inning with their first hit of the game. Ryan Trahan led off with a walk, followed by a single from Kolbie Sowell for the Bobcat’s first hit of the night and that pushed Trahan over to third base. McCoy Marze would hit a high and deep fly ball to right field, plenty of space for Trahan to trot home from third base for the score as the Bobcats took the game in thrilling fashion over the Cardinals 2-1.

The Bobcats add to their impressive season with a second win over the Cardinals to move to a 7-1 record in district and hang on to first seed. The Cardinals saw their four- game win streak end to move to 4-4 in district play, still in the hunt for a playoff berth.

Orangefield will visit Lumberton Friday while the Cardinals welcome in Silsbee.

BRIDGE CITY – Getting a superb mound performance from freshman ace Carson Fall and scoring their four runs in the... read more