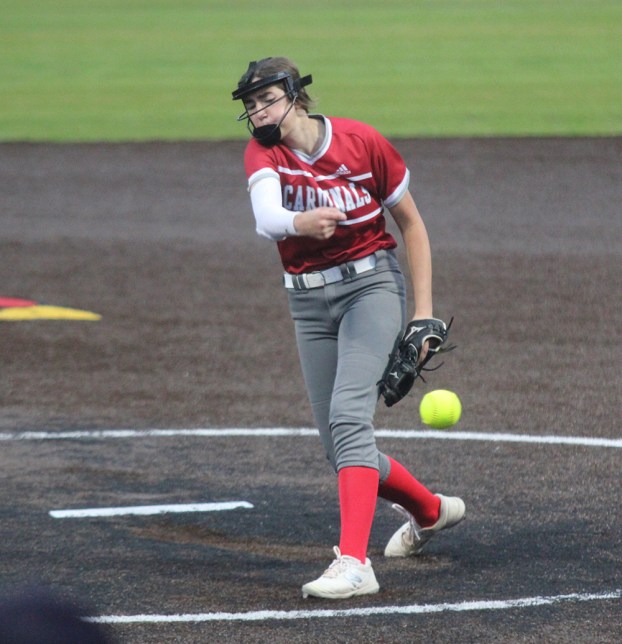 BRIDGE CITY – Getting a superb mound performance from freshman ace Carson Fall and scoring their four runs in the first two innings, the Bridge City Lady Cardinals handed the Orangefield Lady Bobcats their first loss of the District 22-4A season as they captured a 4-0 victory at Lady Cardinal Field.

The Lady Bobcats are now a half game behind LC-M in the standings. LC-M (21-6-1, 9-1) defeated WO-S 8-1 Tuesday. The Lady Cardinals, meanwhile, are alone in third-place in the standings with the win, really boosting their playoff chances with two games left on their schedule.

The Lady Cardinals utilized “small ball” to tally a run in the top of the first.

Amaris Larkin drew a leadoff walk, went to second on a Makenna Carey sacrifice bunt and to third off a Kaylyn Dosch sacrifice bunt. Larkin darted in to score after Austyn Daniels connected on a RBI single to shallow right.

The Lady Bobcats threatened in the bottom of the first.

Senior leadoff hitter Ryden Stanfield, who was 2-for-3 and was the only multiple hitter for the night for either team, slapped a double to left centerfield. Emma Humplik drew a walk and Olivia Grant had an infield single. Unfortunately Stanfield twisted her ankle rounding third on the play and the Lady Cardinals recorded an out there. Fall then settled in and recorded a strikeout and a fly out to get out of it.

The Lady Cardinals tallied three runs in the top of the second with two hits and took advantage of three Lady Bobcat errors.

Leah Jeffery led off with a high fly ball in the infield that was dropped as she motored to second.

Hannah Murchison stroked a RBI single to left centerfield as Jeffery scooted in and the Lady Bobcats made two throwing errors on the play as Murchison came all the way in to score.

Larkin drew a two-out walk and scored when Carey roped a double to right centerfield.

Neither team threatened with much offense the rest of the way.

Jeffery had a two-out single for BC in the third.

Stanfield had a leadoff single for the Lady Bobcats in the third and Grant had a one-out walk but Fall fanned the next two batters.

Sorge slapped a single between third and short with one out in the sixth. With two outs, Heather Mineer singled to right but Fall ended it with a strikeout.

Fall had a leadoff infield single for the Lady Cardinals in the seventh.

The Lady Cardinals will welcome in Silsbee Friday while the Lady Bobcats make a trek to Lumberton.