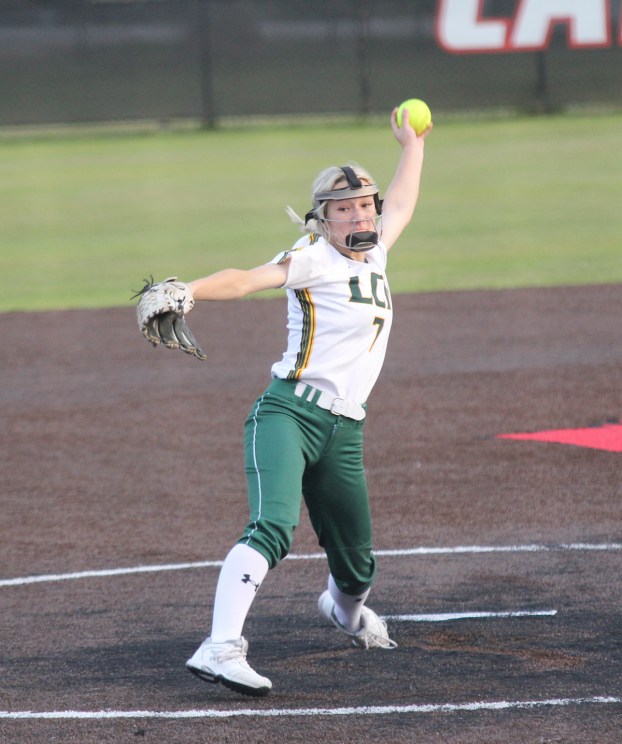 BRIDGE CITY – Cashing on three late runs due to Bridge City errors and riding the arm of senior ace Karson Friar, the Little Cypress-Mauriceville Lady Bears escaped Bridge City with a 3-2 District 22-4A victory over the Lady Cardinals Tuesday night.

After a tough first inning, Friar worked her magic on the hill for the Lady Bears (19-6-1, 7-1) once again. After allowing two runs to the Lady Cardinals (10-11-1, 5-3) in the bottom of the first, she was dynamite the rest of the way in a complete game one-hitter. She struck out 15 and walked four.

Meanwhile, it was a tough loss to absorb for Lady Cardinal freshman Carson Fall. Fall worked her magic all night long, allowing just three hits while striking out 12 and walking four, with two of those coming intentionally to Lady Bear slugger Bailey Frenzel. But the errors simply proved too costly.

Friar had early control issues in the first as she walked three and gave up a hit, but she recovered nicely.

In the bottom of the first Lady Cardinal leadoff hitter Amaris Larkin drew a walk and Makenna then drew a walk. Both of them advanced on a wild pitch.

Larkin managed to zip home on a Lady Bear throwing error and with two outs Leah Jeffrey belted Bridge City’s only hit of the night, a RBI single to left to score McKenna.

The Lady Cardinals had just one more baserunner the rest of the night. Friar struck out seven of the last nine batters she faced.

Meanwhile, Fall was motoring along as well as the Lady Bears just had two base runners through the first five innings.

The Lady Bears managed to knot the score up at 2-2 in the bottom of the sixth.

Madeline Stephenson drew a walk and Shae Fontenot singled past second and Frenzel was intentionally walked to load the bases.

Fall then fanned the next two Lady Bears. Lady Bear Jace Cook, who had a double in the second inning, hit a sharp shot to short and a tough throw from short and a tough catch at first was mishandled as Stephenson and Fontenot raced in to score.

The Lady Bears nabbed the game-winning run in the top of the seventh.

The Lady Bears will head to Lumberton Friday while the Lady Cardinals visit Vidor.

In other 22-4A action Tuesday, Vidor defeated Silsbee 9-3 and Lumberton toppled West Orange-Stark 15-0.

Here are the Southeast Texas track leaders after the completion of the District 22-4A Meet: DISCUS — Girls: Emily Williamson,... read more