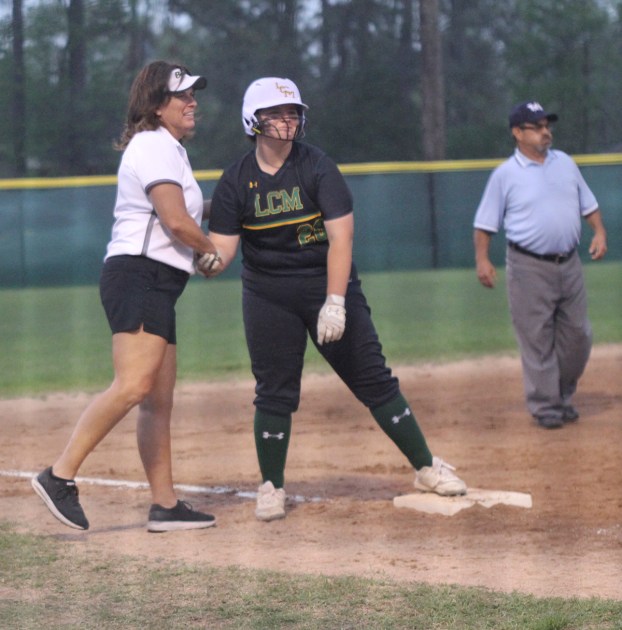 Van Wade/Orange Leader LC-M softball coach chats it up with Lady Bear Ansley Moore at third base against Vidor Friday night. Moore was 2-for-3 and scored twice.

LITTLE CYPRESS – Little Cypress-Mauriceville’s standout senior Bailey Frenzel hit for the cycle, going 4-for-4 with nine runs batted in and senior ace Karson Friar had another solid outing on the hill as the Lady Bears remain perfect in District 22-4A play with a 16-2 victory over the Vidor Lady Pirates at Lady Bear Field Friday night.

Friar tossed all five innings for the Lady Bears (17-5-1, 5-0) as she scattered two hits while striking out seven and walking one.

The Lady Bears struck for a pair of runs in the bottom of the first.

Shortstop Madeline Stephenson, who was 3-for-4 with two RBI, got it going with a leadoff single up the middle. Shae Fontenot was hit by a pitch and Frenzel promptly roped a two-run single past second.

LC-M nabbed five runs in the bottom of the second.

Ansley Moore, who was 2-for-3, had a leadoff infield single and Friar, who was 2-for-2 on the night, got hit by a pitch. With one out, Stephenson slapped a RBI single up the middle. Fontenot then had an infield single to load the bases. Frenzel made it 6-0 with a three-run double down the third-base line.

With two outs, Cami Shugart hit a deep fly to center that was dropped as Frenzel scooted in to score.

The Lady Pirates trimmed the margin to 7-2 with two runs in the top of the third.

Brooklyn Bushelle reached on an error to lead things off. With two outs, Andreya Garrett smoked a RBI double to deep left. Brilie Cornelison scored Garrett with a single to left.

The Lady Bears tallied four runs in the bottom of the third.

Friar singled up the middle with one out and scored off a Rhylan Wilson double to center.

With two outs, Fontenot slapped a RBI single to center and Frenzel capped it with a two-run home run shot over the left centerfield wall.

LC-M ended it with five runs in the bottom of the fourth.

Jace Cook got it going with a one-out single to right. Moore followed with a infield single and Friar singled up the middle to load the bases.

Cook scored on an errant throw off a Wilson grounder. Stephenson cranked a two-run double to right and Frenzel brought in the last two runs with a triple.

The Lady Bears will now hit the road to take on the Orangefield Lady Bobcats (16-4-2, 5-0) in a nice first-place showdown to wrap up the first half of 22-4A play on Tuesday.

District 22-4A baseball, softball standings; schedule for the week

Here are the updated District 22-4A baseball and softball standings and schedule for the week: BASEBALL Silsbee (11-4-1, 2-0) LC-M... read more