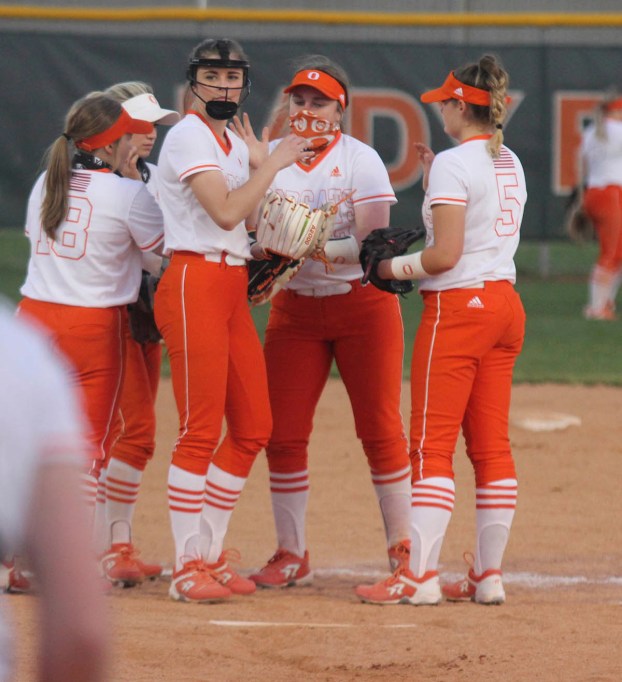 ORANGEFIELD – Scoring five runs in the bottom of the sixth inning, the Orangefield Lady Bobcats were able to remain undefeated in District 22-4A play with a 14-9 victory over a scrappy Lumberton Lady Raiders unit Tuesday night at Lady Bobcat Field.

The Lady Bobcats (15-4-2, 4-0) got it going in the bottom of the sixth with the score tied at 9-9 when Abigail Curphey had a one-out single to left off Lumberton (9-8-2, 2-2) reliever Sydnie Cline. Madison Hughes was able to put down a nice sacrifice bunt to move Curphey to second. That’s when the bottom fell out for the Lady Raiders.

Sorge got the win on the hill for Orangefield. She allowed nine hits while striking out six and walking seven.

Kynlie Sisk tossed the first 4 2/3 innings for Lumberton, allowing six hits while striking out eight and walking six while Cline worked 1 1/3 innings, allowing four hits while walking two. The Lady Raiders committed six errors on the night, including five in the outfield, that led to a slew of early Orangefield runs.

Lumberton led 3-0 after the top of the first as Cline had a RBI double to center and Chloey Verde had a two-run RBI to left.

The Lady Bobcats scored four runs in the bottom of the second to take the lead.

Heather Mineer reached on a dropped fly ball in left. Joli Ponfick drew a walk and Curphey reached on a fielder’s choice bunt that loaded the bases.

With two outs, Humplik drove a RBI single to left. Grant then lifted a deep shot to rightfield that was dropped as three runs scored on the miscue.

Orangefield extended its lead to 6-3 in the bottom of the third.

Rawls had a leadoff single and went to second on a Mineer sacrifice bunt. Ponfick connected on a RBI single to left and Curphey drove in Ponfick after her deep fly ball to center was dropped.

The Lady Raiders countered with six runs in the top of the fourth to snag a 9-6 edge.

Madyson Henley had a RBI single to left and Sisk eventually drew a bases-loaded walk to  to trim the Lady Bobcat lead to 6-5. Cline then connected on a grand slam home run over the leftfield wall to give the Lady Raiders a three-run edge.

The Lady Bobcats got to within one in the bottom of the fourth.

Grant drew a leadoff walk and Rawls walked with one out. Mineer cranked a RBI single to left and Ponfick followed with a sharp fly to centerfield which was dropped.

Orangefield tied it in the fifth.

Stanfield drew a leadoff walk, swiped second, went to third on a wild pitch and scored on a Sorge RBI infield single.

The Lady Bobcats will visit West Orange-Stark Friday while the Lady Raiders will take on Silsbee.

West Orange-Stark’s Tyrone Brown will look to repeat as the best Defensive Player in Southeast Texas as he is one... read more