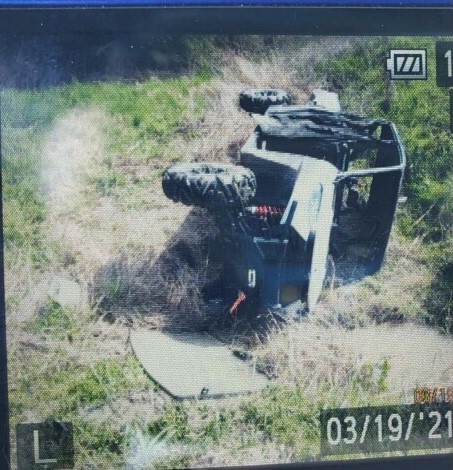 PRESS RELEASE — At approximately 3:15 p.m., the Texas Department of Public Safety (DPS) Troopers responded to a single vehicle crash involving an all-terrain vehicle (ATV).  The crash occurred at the intersection of Brush Island Road and Powers Road in Jefferson County.

The preliminary DPS crash investigation indicates that a 2021 Polaris Ranger was traveling on Brush Island Road at an unsafe speed.  The 8-year-old driver attempted to make a left turn onto Powers Road, but lost control of the vehicle.  The vehicle rolled over several times before coming to rest.

The driver of the ATV, an 8-year-old child, and three other children, ages 10-13, were transported to St. Elizabeth hospital.  Their injuries did not appear to be life threatening.

The fourth passenger and grandmother of the four children, 55-year-old Wendi Martinez of Houston, was transported by medical helicopter to Hermann Memorial hospital in Houston with serious injuries.

This is an ongoing crash investigation and there are no additional details available at this time.

The Louisiana Department of Wildlife and Fisheries (LDWF) is sounding the alarm that troublesome zebra mussels have been detected in... read more