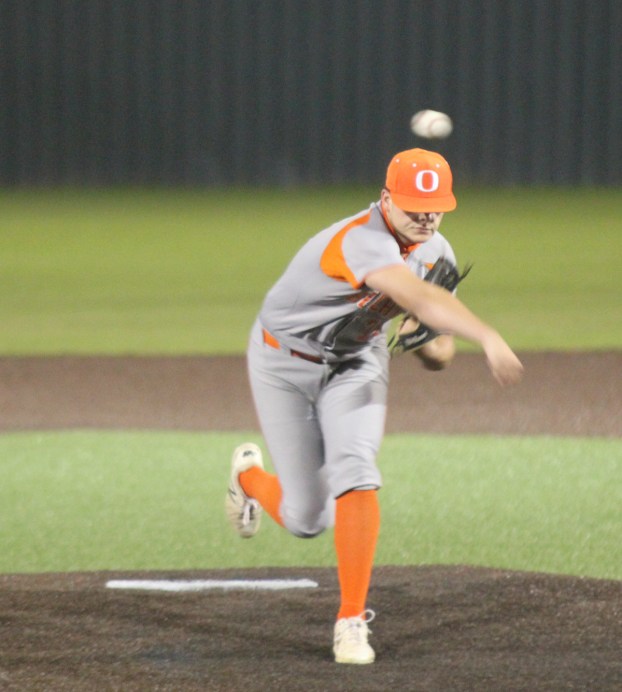 Bobcats squeeze out 6-5 win over Bridge City in 8

BRIDGE CITY – The Orangefield Bobcats pulled out a nice road win in a nailbitter as they downed the Bridge City Cardinals 6-5 in extra innings in District 22-4A action at Chuck Young Field in Bridge City on Friday night.

Logan Gipson got the nod on the mound for the Bobcats (8-5-2, 1-1) this game, and had a great night on the mound. Gipson would go six innings on 111 pitches with seven strikeouts, one walk issued and four hits allowed with one unearned run score. The Cardinals (7-7-1, 0-2) had a few opportunities for runs, but Gipson tightened up when it mattered and made life hard for the opposing offense.

Gipson would try to finish the game, but the bottom of the seventh was where the Cardinals made a stand and sent it to extra innings. Jace Gipson would get the win in the end, finishing up what his brother started.

Slade Foreman got the start for the Cardinals, going four and a third innings on 83 pitches, allowing four hits, six strikeouts and no runs before an injury forced his night to end early. The Cardinals would use an array of different pitchers to get through the rest of the night.

Offensively Kamryn Henderson had a great night for the Bobcats. He would go one for three with a double, two walks and the game winning squeeze bunt in the top of the eighth inning. Sitting in the two spot of the lineup, Henderson did a great job of getting on base and creating opportunities for his team all night.

Sam Carpenter would lead the Cardinals from the three hole. Carpenter would go two for four with two singles and a sacrifice fly that would tie the game in the bottom of the seventh inning.

The Cardinals found the first runs of the game after getting their first hits in the bottom of the second inning. Kade Benoit singled to lead off the inning, JS Bearden would single, but on the throw the ball went out of play and Benoit was given home plate as a ruling. The Cardinals took a 1-0 lead after the second inning..

The Bobcats responded in the next half inning with some offense of their own. Kamryn Henderson would lead off with a hard double to left field, followed by a dinker from Tyler Shearin, just short of the left fielder, enough to score the speedy Henderson from second base. The Bobcats would leave Shearin on second base, but tied up the game 1-1 heading into the bottom of the third.

The Bobcats took the lead in the top of the fifth thanks to an error from the Cardinal defense. Tyler Washington would double to lead off, followed by a walk to Henderson. An intentional walk would be issued to Logan Gipson to load the bases with two out, and make it easier on the defense to make a play anywhere. Gunner Jones would sky one to shallow right field, but the fielder couldn’t hang on and Washington and Henderson would score from third and second base. Gipson would advance to third on that play, and during the next at bat he would run his way home after a wild pitch from the Cardinals hit the backstop. The Bobcats took a 4-1 edge heading into the bottom of the fifth inning.

The Cardinals scored for the first time since the second inning, in the sixth. Sam Carpenter led off with an infield single and took second base after a wild pitch was thrown. Benoit would dink one to second base but a rushed throw would go wide and Carpenter was able to come around and score off the error. The Cardinals wouldn’t find any more runs, but cut the lead to 4-2 with the Bobcats leading after the sixth inning.

The Bobcats extend edtheir lead in the top of the seventh inning. Henderson would lead off by taking a pitch to the elbow, followed by a single from Shearin and another intentional walk to Gipson that loaded the bases. Jones would take four balls and earn an RBI with a bases loaded walk. That’s all they would get, but they added a little cushion to their lead at 5-2 heading into the final half inning.

The Cardinals offense woke up in the bottom of the seventh and tried to come back and win. Cayden Baker would start it off with a walk and Draven Marlow would get hit by a pitch and walk as well. Brice Swanton hit a grounder to shortstop but a throw would go wide to load the bases. Jude Danks hit a dinker to shallow right field, the ball would be bobbled, allowing Baker and Marlow to come around and score. Carpenter hit a deep fly, far enough to let Danks score on the play to tie the game. That’s all they could get across, but they tied the game and sent it to extra innings.

The Bobcats regained the lead in the top of the eighth inning. Macoy Marze started with a hard double to left center field. Washington put down a great sac bunt to move Marze to third, and another great bunt from Henderson would drive in the run from third base as the Bobcats took a crucial 6-5 lead heading to the bottom of the eighth.

The Bobcats lost the lead for a moment in the seventh inning, but the small ball would score the run they needed.

The Bobcats will be back at home Tuesday when they host Lumberton while the Cardinals will make a trek to Silsbee.