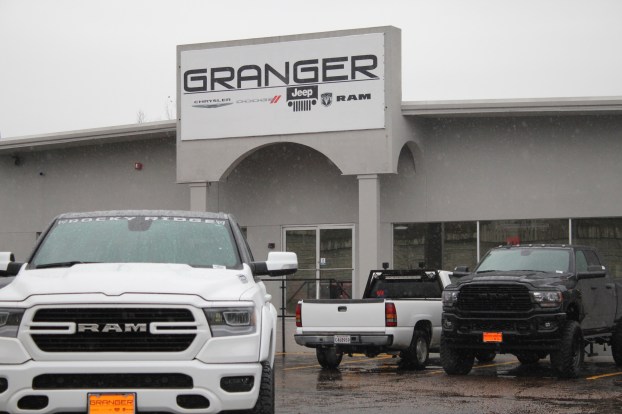 On a shelf, in a frame is one of Al Granger’s infamous quotes, “Always looking for an opportunity.”

“I learned a lot more by listening than talking,” Granger said as he talked about the latest expansion of the Team Granger dealerships.

Al knew from a young age that he was going to be involved in the auto business since he was in the 8th grade and took an aptitude test.

He never considered moving away from the area. He left that to his brother Dean. Dean lived in the Dallas area for approximately 20 years before returning to Orange and partnering with his brother to open Granger Chevrolet.

Al and Dean Granger began at Automart in August 1980.

Together the brothers purchased Harmon Chevrolet, remodeled it and opened as Granger Chevrolet in 2008.

In 2015, they expanded again and added Granger RV to the team.

In August 2020, less than seven months after losing his brother, Al purchased the Chrysler, Dodge, Jeep and Rams dealership.

“I was able to hire people at all three locations during the pandemic,” Al said. “We hired approximately 12 employees. We did not experience any layoffs due to COVID.”

Ralf Mims, Marketing Manager, said “We were able to overcome obstacles due to the COVID Crisis.”

They may have experienced inventory shortages from manufacturers, but overcome they did.

“Orange has always been good to me,” Al said. “We are a small town and you get to know every body. It is fun to go someplace and see people you know and have done business with. Lamar State College Orange is right, Orange’s future is bright.”

While 2020 was a different kind of year for most of us, Team Granger saw an increase in business including RV sales.

“We were up 78-percent in RV sales and 33-percent of those were millenniums,” Granger said. “People were buying travel trailers instead of staying in hotels.

And while there are always changes in the auto industry, Al said the next big thing will be electric cars.

“The electric cars are coming,” Al said. “GM introduced a Hummer with 1,000 horsepower and all electric. The first initial order sold out in 15 minutes.”

But one thing that will not change is the commitment to the community Granger has shown over the years.

From co-hosting the can good drive each October to help restock the shelves at Orange Christian Services and Salvation Army to a 5K run to benefit United Way of Orange County.

“We have all intentions of hosting a 5K this year,” Al said. “Dean was very passionate about it. We have always been involved in community projects. We are ready, been ready to do it again.”

WASHINGTON — Operators of recreational vessels less than 26 feet in length will be required to use an engine cut-off switch... read more