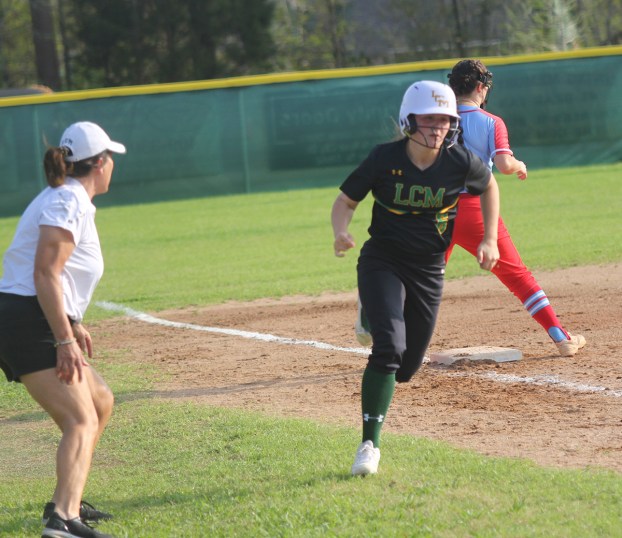 Van Wade/Orange Leader LC-M's Cami Shugart turns the corner at third and heads for home after Coach Dena Adkins waves her in after a two-run single by Karson Friar.

LITTLE CYPRESS – Led by the superb all-around performance by pitcher Karson Friar, the Little Cypress-Mauriceville Lady Bears remain perfect in the early going of the District 22-4A season with a 6-2 victory over the Lumberton Lady Raiders Tuesday night at Lady Bear Field.

Friar went to distance on the hill for the Lady Bears (15-5, 3-0). She struck out 17 Lumberton batters. She allowed just two hits while walking five.

She had a no-hitter through 5 1/3 innings and at one point struck out nine Lady Raiders (1-1 in district) in a row. Lady Raider shortstop Halle Post reached on a one-out bunt single in the top of the sixth and Bailey Edwards followed with two-run home run over the centerfield wall to give the Lady Raiders their runs.

Friar was hot at the plate as well, going 3-for-3 while also driving in two runs in the bottom of the first inning, the frame that the Lady Bears scored all six of their runs.

The Lady Bears finished with 11 hits off Lumberton pitcher Kynlie Sisk, who worked all six innings. After a tough first inning, Sisk settled down nicely and got out of jams as the Lady Bears left the bases loaded in the third and left two on in scoring position in the fourth.

The Lady Bears got all that they would need though in the bottom of the first.

Madeline Stevenson drew a leadoff walk and Shae Fontenot followed with a bunt single. Bailey Frenzel, who was 2-for-3, loaded the bases with a single to center.

Ava Wright reached on an error at short and Stephenson cruised in for the first run.

Cami Shugart drove in Fontenot with a RBI single to left and Frenzel eventually scored on a wild pitch to make it 3-0.

Jacelyn Cook reached on an error at first and with two outs, Friar cracked a two-run single to push it to 5-0.

Stephenson, who was 2-for-3, managed to drive home Cook with a RBI single up the middle to make it 6-0.

The Lady Bears return to action Friday when they visit West Orange-Stark for a 6 p.m. varsity-only start.

FRISCO, Texas — Recognition from the Southland Conference office made its way to Nacogdoches on Monday with the announcement that... read more