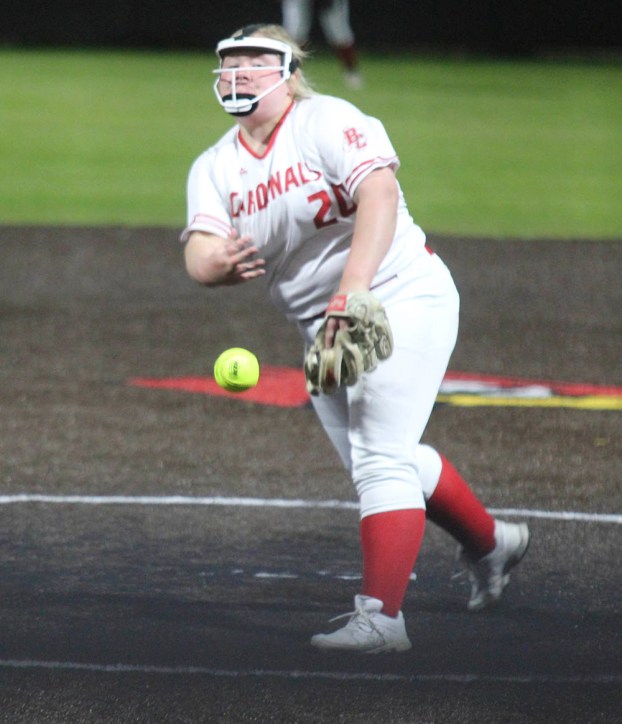 Melton worked all six innings and tossed a no-hitter, striking out 10 while walking just one. The Lady Mustangs (7-7-1, 0-1) had just three baserunners all night with the other two reaching on errors.

Haylee Veitch went out 5 2/3 innings on the mound for WO-S as she allowed eight hits while striking out one and walking two.

The Lady Cardinals got it going in the bottom of the first after Amaris Larkin and Kaylyn Dosch were hit by pitches by Veitch with no outs.

Makenna Carey, who had two hits, loaded the bases with a bunt single.

Melton then reached on an error that scored Dosch and Carey also raced in to score on another WO-S throwing error to make it a 3-0 Bridge City lead.

In the bottom of the fourth the Lady Cardinals struck for three more runs.

Carson Fall had a leadoff walk and with one out Haley Munoz reached after being hit by a pitch. Larkin then walked to load the bases.

Dosch then came through with a two-run single. A Carey RBI groundout made it 6-0 and a Strong RBI single to center made it 7-0.

In the bottom of the sixth Dosch reached on an error and Carey singled past second. Melton made it 9-0 with a two-run single past short.

The Lady Cardinals scored their 10th run when Fall reached on an error and courtesy runner Chloe Huff scored to end the game.

For WO-S Tier Garrett reached on an error in the top of the first.

The Lady Mustangs had two runners on in the top of the sixth when Laila Rhodres drew a one-out walk and Ariel Farris reached on an error but Melton worked her way out of it with a strikeout and a fly out.

The Lady Cardinals will visit LC-M Friday while the Lady Mustangs return home to host Lumberton.