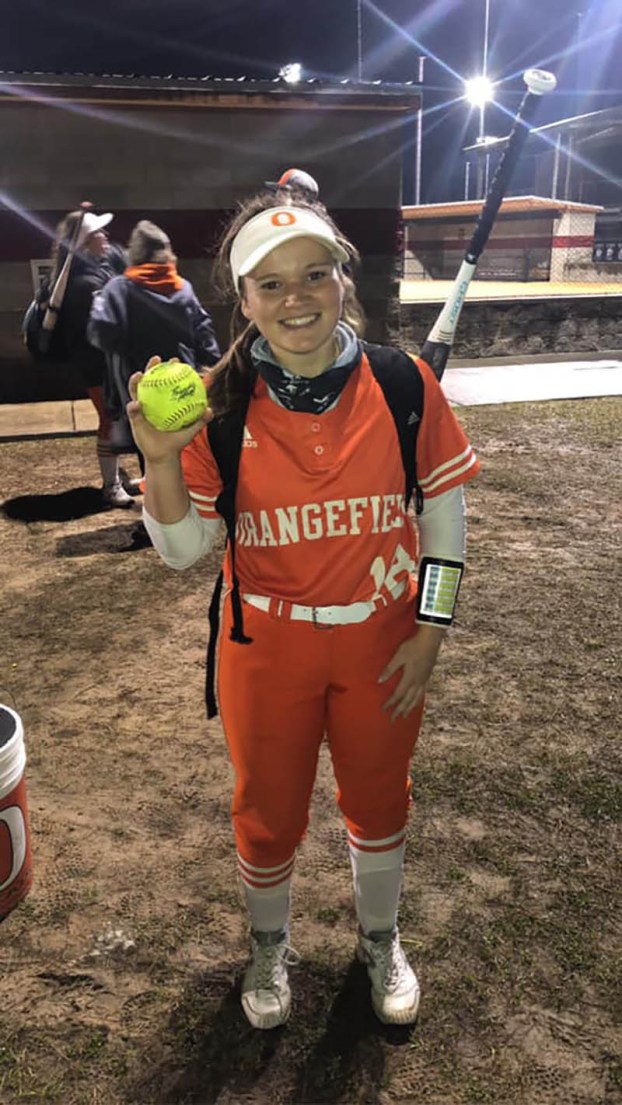 Courtesy Photo Orangefield Softball Orangefield's Olivia Grant hit a home run in the bottom of the seventh to lift the Lady Bobcats over Vidor.

ORANGEFIELD – The Orangefield Lady Bobcats beat the Vidor Lady Pirates in a close district game 6-5 at Orangefield on Tuesday night in the District 22-4A opener for both teams at Lady Bobcat Field.

The Lady Pirates (9-3, 0-1) took an early lead but the Lady Bobcats (11-4-2, 1-0) offense woke up mid-way through the game and did just enough to take the win. Olivia Grant would also make her presence known after having a tough night at the plate, she ended the game with a solo homer over right-center field to seal the game for the Lady Bobcats.

The offense came in bursts for both teams this game. The Lady Pirates would find the majority of their runs in the top of the second inning. Skyler Head would lead the Lady Pirates on offense, going two for four on the night, with a double and single and came across to score once.

Harleigh Rawls was the standout for the Lady Bobcats. She would go two for three with a single and a three run homerun that took the lead for them in the third inning.

The Lady Pirates started the scoring in the top of the first. Skyler Head lead off with a dinker over the left infield and managed to turn it into a double. Head would take third base after a pass ball to bring up Brilie Cornilson. Cornilson would hit a deep fly, enough for Head to score from third base to take the game’s first lead. That’s all the Lady Pirates would find, but they took an early 1-0 lead after the first half inning of play.

The Lady Pirates took advantage of a few Lady Bobcat errors to extend their lead in the second inning. Ashlee Malagane walked, followed by an error from the Lady Bobcats to put Khloie Andrus on first. Brooklyn Bushelle would hit a single to move everyone up a base and bring up Izzy Wade. Wade hit into another error, scoring Malagane and Andrus from second and third base. A fielders choice on Head’s hit would bring in Bushelle for the third run. The Lady Pirates led 4-0 after an inning and a half of play.

The Lady Bobcats found their first run in the bottom of the second inning. Codie Sorge lead off by getting on thanks to an error from the Lady Pirates. Heather Mineer would dink one over third base to score Sorge from second base and put herself on second. That’s all they would find, as the Lady Bobcats trailed 4-1 after the second inning is done.

Sorge found a hole in the right side of the infield and brought in another run for the Lady Bobcats. The first two batters, Ryden Stanfield and Emma Humplik, walked to begin the inning. Olivia Grant would hit a long sac fly to move Stanfield to third base. Sorge would come up and drive one past second base and bring in Stanfield for a run. Rawls would then come up and hit a moonshot over left field to bring everyone in and take the lead with a three run homerun.The Lady Bobcats took a 5-4 lead after the third inning was done.

The Lady Pirates weren’t accepting defeat in the top of the seventh inning. Cornilson would smack a single to get things going, followed by a double from Andrea Garrett, putting runners on second and third base. A walk issued to Allison Simmons loaded the bases. Jaidyn Green would hit a deep sac fly to score Cornilson from third. That’s all they would find, but the Lady Pirates tied the game 5-5 in the top of the seventh.

Grant showed up big and walked it off in the bottom of the seventh. Grant led off the seventh for the Lady Bobcats and made sure no one else had to come to bat. A bomb over the right-center fence sealed the deal on the game.

The Lady Bobcats win a thriller in an all important district match against a tough team in the Lady Pirates.