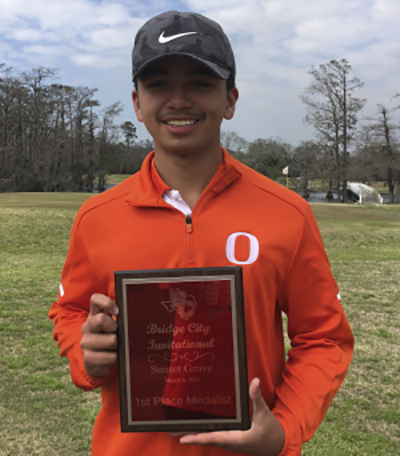 Parks won the tournament with a two-over par 73.

The Bears had four great scores as Travis Love led the way with a round of 78 (4th overall), Wyatt Wozniak shot an 81, Timothy Weaver fired an 83, and Will Van Pelt finished with an 86.  The teams total of 328 landed the Bears a 2nd place finish behind Hamshire-Fannett (323).  The LC-M girls played in Silsbee’s Bobby Woodard Classic held at Silsbee Country Club.  Neely Wozniak fired an 89 to take 2nd overall and help lead the Lady Bears to a 2nd place finish in the team division.  Jaycie Benton shot a 110, Trinity Williams fired a 120, and Alysa Weizenegger finished with a 140.  The Lady Bears finished with a total score of 459 (Bridge City took 1st with a team score of 411).  Jack Burke and Montana Dileo will play in the State Preview at Plum Creek Golf Course in Kyle on Friday and Saturday.

The Bridge City Lady Cardinals captured first place at the Nederland Tournament. Cadence Underwood placed first with a score of 73 and Saylor Moreau third with a score of 95. Ashley Hale and Chloe Wedekind also set personal best rounds with 108 and 114. Kendyl Thomas and Mattie Hoffman also contributed to the win.