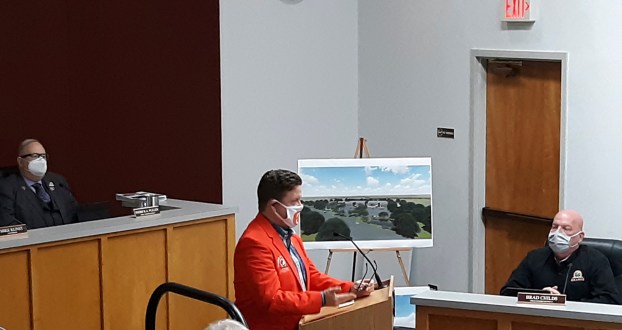 Dawn Burleigh/Orange Leader Chamber of Commerce Chairman Chris Kovatch announces, during the Tuesday morning Orange City Council meeting, the Bassmaster event will be in April after the dates were changed to August due to COVID-19.

Bassmaster Elite back on for April

Greater Orange Area Chamber of Commerce Chairman Chris Kovatch announced at Orange City Council Tuesday morning that Bassmaster Elite at Sabine River, which was rescheduled for August, will return to its originally scheduled dates April 8-11 after Texas Gov. Greg Abbott rescinded mandates that would have dramatically reduced the number of fans permitted on-site.

“Due to the mandate being lifted, Bassmaster asked about pushing the event to the original dates in April,” Kovatch said. “We will have hand sanitizers and masks available. We appreciate your partnership for this event.”

Despite the rollback of previous COVID-related mandates, officials from both B.A.S.S. and Orange County have cautioned that fans should still exercise caution in large gatherings and encourage measures such as social distancing and frequent hand-washing or use of sanitizer to reduce the risk of spreading germs.

“We’re happy to work with officials in Orange to get this event back on April’s schedule,” said B.A.S.S. CEO Bruce Akin. “These unprecedented times have truly emphasized the need to work with great partners, and the flexibility from officials and our hosts at the Greater Orange County Chamber of Commerce is deeply appreciated.

“Our priority is offering an event that is responsibly operated and safe for everyone involved while still being fun and competitive.”

Brown Hearing Centers is a family owned and operated company that was established in 1962 by Lee and Dorothy Brown.... read more