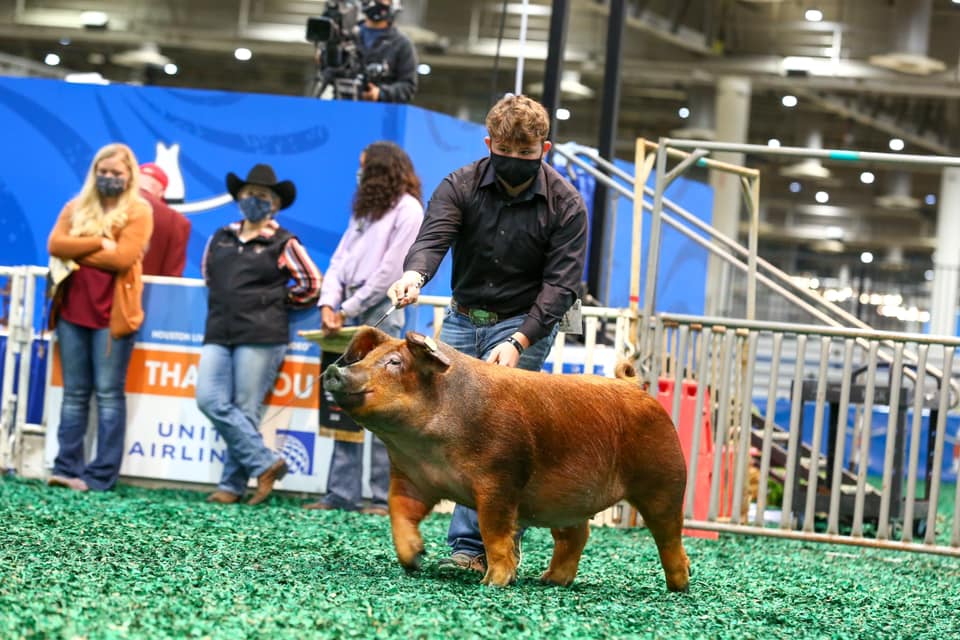 Dylan Pyatt joined the 4-H club approximately nine years ago and has since won numerous awards, buckles, and titles since. He said there are too many to count. He is now a senior and decided to go all out for his last year.

“This year has been phenomenal,” his mother, Melissa Pyatt, said. “Scott Smith of Living Large Livestock was instrumental in our success.”

4‑H is a community for all kids with programs that suit a variety of backgrounds, interests, budgets and schedules. Whether at home, in-school or after-school, in clubs or at camps, 4‑H’s positive youth development programs are available in your local community and welcome children who want to have fun, learn and grow, according to its official website.

4-H Program Assistant for Orange County Franny Woods listed some of his accomplishments for this year:

“He is an amazing young man with an incredible work ethic and a passion for what he does,” Woods said. “He is a great mentor to the younger 4-H members and an amazing friend to everyone.”

Not only does Pyatt show his animals but he is also in three clubs: Mighty Pirates, Youth County Council and OC 4-H Judging Club.

“He holds officer positions in each one as well,” Woods added.

Pyatt is president of each of the clubs.

When asked what hobbies he has when he is not showing his heifers or pigs, he said it keeps him pretty busy.

“It has turned into a career for me,” Pyatt said. “I get up an hour early so I can brush them down, drop my brother off at work before I go to work. After work, I tend to them again and take care of school. I don’t watch television or play video games.”

He added that this was his hobby.

All his hard work paid off.

“Dylan and his family decided that for his senior year he wanted to go all out with his pigs this year,” Woods said. “They wanted to and I quote “make his dreams come true.” Well, they did just that! Dylan competed in numerous Jackpot shows and did very well. He won quite a few belt buckles, banners and ribbons.”

After graduating, Pyatt plans to attend college locally and major in Business Managament.

“I want to be a Planner,” Pyatt said. “I want to stay in livestock and in the pig industry. I also want to train pigs.”

Pyatt started by showing swines before trying his hand at showing a steer in 2015.

With steer, one only keeps the animal for one year.

“We know how that ends,” Melissa Pyatt said.

The following year, Dylan opted to show a heifer, which one keeps for three years.

“I fell in love with the heifers,” He said. “The first year, you show her. The second year you show her with her baby then they are turned out to pasture cows.”

With the swine, the animal is returned home.

“I have to Duroc returns home so she can have babies and make another kid happy,” Pyatt said.

Woods said, “We will miss Dylan Pyatt as a 4-H member when he graduates but, he has agreed to come back and help us out as a volunteer. Our kids will definitely benefit from his experience as a 4-H member.”

Pyatt’s mother said the 4-H and FFA programs have the hardest working kids.

“They are the backbone of our future,” Melissa Pyatt said. “If your child wants to join, go for it. It is wonderful and there is no better place.”

Her younger children are already following in Dylan’s footsteps.

According to Dylan, one of the greatest joys has been meeting new people.

“It has opened new doors for me,” Dylan Pyatt said. “It is a great community in 4-H and it is like a second family.”

Pyatt plans on competing at the YMBL Livestock show in March.