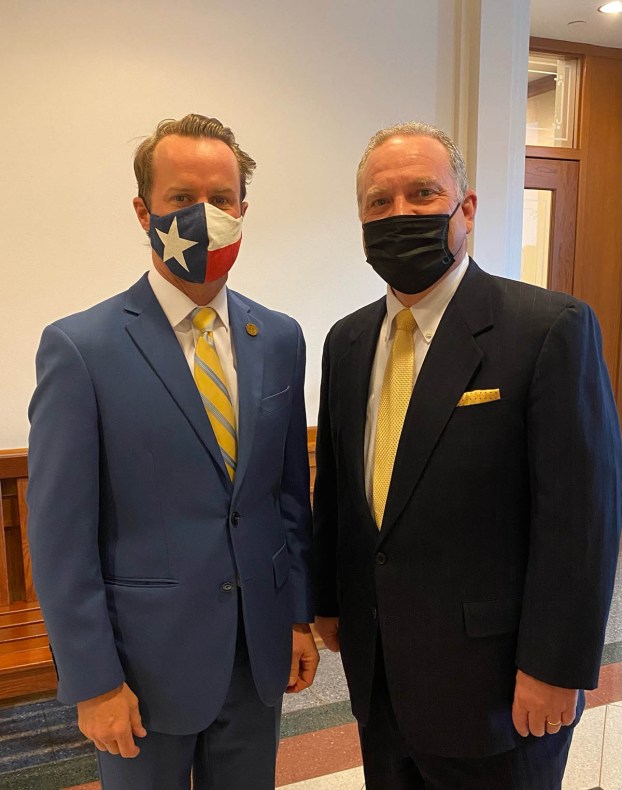 Before testifying before the Senate Finance Committee, President Johnson met with Texas House Speaker and Orange’s State Representative, Dade Phelan, highlighting the success that LSCO has made over the past two years as well as where the college is headed in the next biennium.

Then, before the Senate Finance Committee, Chancellor Brian McCall led the Texas State University System Component delegation, where after each president laid out their vision for the next biennium.

Dr. Johnson testified to the resilience of LSCO’s students, faculty, and staff, enduring, in little more than a twelve-month period, the aftermaths of Hurricane Harvey, Tropical Storm Imelda, the pandemic, then Hurricanes Laura and Delta in a six-week period, followed by the recent winter ice storm.

Johnson then highlighted LSCO’s financial requests of the Legislature, which included $1.5 million to build an Industrial Technology Academy which would create a learning space for dual credit and other students to develop a trade or craft. He also requested funding to repair the Academic Building, built during the Theodore Roosevelt Administration in 1908, that was heavily damaged by Hurricane Laura this past fall. Additionally, he asked for $40 million via a tuition revenue bond to build a new state-of-the-art Academic Building. Finally, he asked for $1.5 million to purchase a natural gas generator to help the campus function during, and to recover more quickly after, future hurricane and tropical events.

“We went up significantly in our enrollment, and not only in just enrollment, we increased our transfer rate to four-year schools by economically disadvantaged kids, like me, by twenty-five percent,” Johnson said of the past two years, “and then a thirteen percent increase in our degrees and certificates being awarded.”

In regards to the Industrial Technology Academy, Johnson said, “What we’re asking for is to build an Industrial Technology Academy right there, so the five school districts around us don’t have to worry about doing this; they can come to us to learn a trade or skill while they’re in high school. Dual credit is a wonderful thing for those wanting to go to university, but also, if we can channel it into learning a trade or a skill or a craft, that would be a wonderful thing.”

Finally, Johnson thanked the Legislature for its tremendous support and financial backing through LSCO’s recent initiatives and improvements over the past two years.

After Dr. Johnson’s testimony, Senator Robert Nichols, who represents Orange, said about Johnson, “You’re the right man, in the right place, at the right time.”

Senator Eddie Lucio, Vice Chair of the Senate Finance Committee, said, “You were meant to be President [there] and you’re an outstanding one.”

Both senators commended Johnson and LSCO for the accomplishments the institution has made over the past two years.

BEAUMONT — The Art Museum of Southeast Texas (AMSET) will exhibit DELITA MARTIN: Conjure on view March 13, 2021 through May 23,... read more