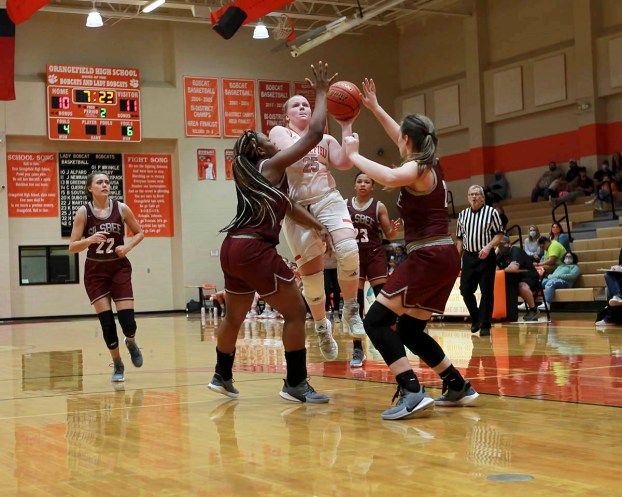 Mark Pachuca/Orange Leader Orangefield guard Joli Ponfick and the Lady Bobcats will face Brookshire-Royal in the area round Monday night in Baytown.

The Orangefield Lady Bobcats and the Brookshire-Royal Lady Falcons have finally set their Class 4A Region III area round basketball playoff game.

The Lady Bobcats (16-8) will take on the Brookshire-Royal Lady Falcons (17-7) in the area round Saturday at 1:30 p.m. at Ross S. Sterling High School in Baytown.

It has been a tough game to schedule for both schools with the inclement weather and the area around the Brookshire-Royal schools was really hit hard with an abundance of power outages. The UIL is allowing teams to get their games in, especially the girls squads across the state. This Monday will make 11 days since the Lady Bobcats and Lady Falcons played their bidistrict playoff games, which they both won handily.

The Lady Bobcats hammered Liberty 52-29 in the bidistrict round while Royal blasted Houston Worthing 83-27.

The Orangefield-Brookshire Royal winner will face either Lumberton or Houston Kashmere in the next round.

The Bridge City Cardinals and the  West Orange-Stark Mustangs know their opponents and when and where they will play this... read more