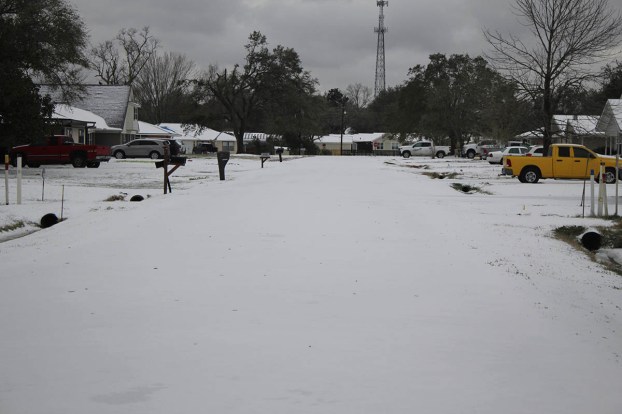 Major winter storm underway across the Plains, alerts out across the South

AccuWeather Global Weather Center – Winter storm warnings are in effect, and the time to hunker down is now across a majority of the South Central states, as a major winter storm is bearing down on the region. Through Monday, many Southern cities that are not accustomed to snow, ice and bitterly cold conditions will lie within the bull’s-eye of some of the worst impacts of the incoming storm.

Snow had already begun spreading across the Plains prior to dawn on Sunday, with places like Amarillo, Texas, Oklahoma City and Wichita, Kansas, already reporting snowflakes flying in the area.

As of early Sunday afternoon, over 58,000 customers were without power in Texas, according to PowerOutage.us. That number skyrocketed to over 1.5 million by early Monday morning.

Texas governor, Greg Abbott, issued a state of emergency across the entire state ahead of the arrival of the storm, and secured a federal emergency declaration from the White House in order to make additional resources available for communities impacted by this weather event. 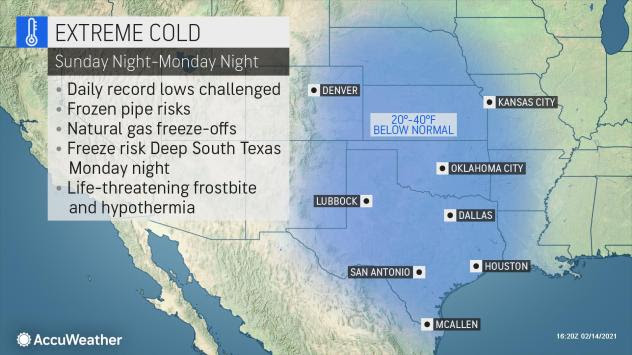 “Every part of the state will face freezing conditions over the coming days, and I urge all Texans to remain vigilant against the extremely harsh weather that is coming,” said Governor Abbott. “Stay off the roads, take conscious steps to conserve energy, and avoid dangerous practices like bringing generators indoors or heating homes with ovens or stovetops.”

Texas and Oklahoma have already experienced a fair share of winter weather so far this season, however, none of the preceding winter storms had cold air of this magnitude along with the snow and ice. This storm could truly be a ‘Once in a generation’ type event when factoring in the brutally cold conditions.

“Life-threatening cold is an additional risk with this storm, and any motorists who become stranded on snowy or icy roads may find themselves in a dangerous situation. AccuWeather RealFeel® Temperatures in some areas may be in the single digits or even below zero for 12 hours or more, and that’s a significant concern for anyone unprepared for cold of this magnitude as hypothermia and frostbite can occur very rapidly,” said AccuWeather Meteorologist Randy Adkins.

The cold will also help to keep any ice and snow accumulations around for several days following the end of the storm.

The storm will feature an expansive swath of snowfall accumulations at or above a half of a foot before all is said and done. Lubbock, Fort Worth, and Wichita Falls are just a few cities across the Lone Star State expected to really pile up the snow. Farther north, cities like Oklahoma City, Tulsa and even Wichita, Kansas, can also plan on some hefty snowfall totals. 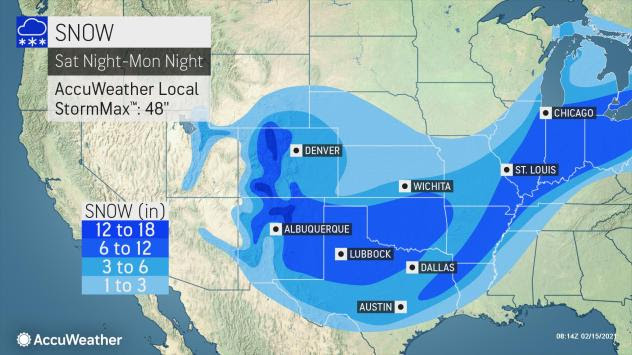 The strength and magnitude of the cold air will also press all the way down to the Gulf of Mexico through early week. Residents of Houston will want to prepare for a difficult commute Monday morning as freezing rain, sleet and snow targeted the area overnight Sunday, leaving many roadways impassible. Farther inland, College Station and Austin, Texas will likely experience a transition over to wintry precipitation earlier, resulting in a higher chance for accumulations.

Into the day on Monday, the swath of snow and ice will begin to clear out of Texas and Oklahoma in a west-to-east fashion as the storm treks along. Although conditions will dry out, the extremely low temperatures will continue to pose a threat. Many homes across the South are not as well insulated compared to homes farther north, which can potentially lead to issues like bursting pipes.

Protect your pipes, pets, plants and people. Please do not travel today or this evening if at all possible. This... read more