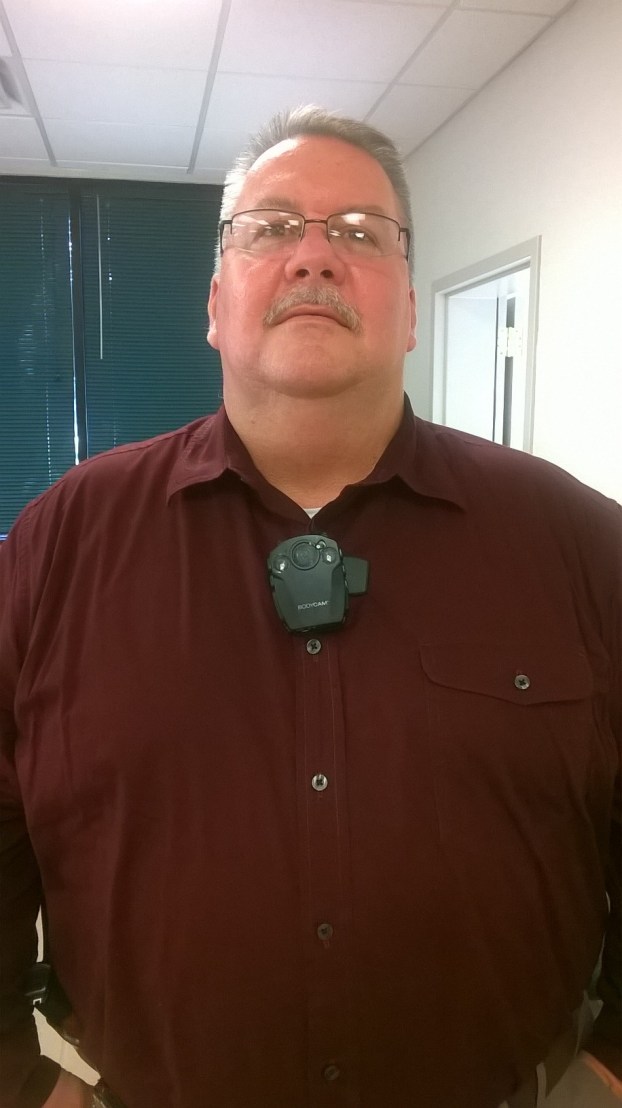 Pinehurst Chief of Police Fred R. Hanauer III demonstrates the use of the body cameras while explaining their versatility.

Hanauer has been with Pinehurst since 2003 when he accepted an investigator position.  Hanauer was appointed as interim chief in October of 2008 and was later appointed as chief of police in April of 2009. After a brief time, off Hanauer will be accepting a position as a special investigator with the State of Texas and will continue helping others but in a civilian capacity.

Hanauer stated, “This is one of the toughest decisions I have ever made. It has been an absolute joy working for Pinehurst and serving its citizens. I have a great crew and will miss the closeness and camaraderie we all enjoy.”

Hanauer added, “City Administrator Jerry Hood has a great vision for the City of Pinehurst and has already taken steps to bring his vision to fruition. I hate that I will not have a front row seat to see it happen. Through hurricanes, floods, active shooter events and more recently, a pandemic, our officers and support staff have come through with flying colors in helping the citizens of Pinehurst. I would also like to thank the city council for their support throughout the years as well as all employees at the City of Pinehurst.”

Hanauer has been a peace officer in Orange County for 27 years. He has been married To Linda Ramirez Hanauer for 21 years and met when they were both employed at the sheriff’s department. She has been a licenses vocational nurse for 30 years. Together they have 5 children and 4 grandchildren. Incidentally, Hanauer’s daughter is employed by the Orange County Sheriff’s Department as a corrections officer which is how he started his career.

The City of Pinehurst is currently accepting applications to fill his position.

Hanauer’s last official day as chief of police will be February 25, 2021.

Asevedo puts hat in the ring for election

By Dawn Burleigh PINEHURST — Johnny Asevedo, a resident of Pinehurst for six and a half years, said he is... read more