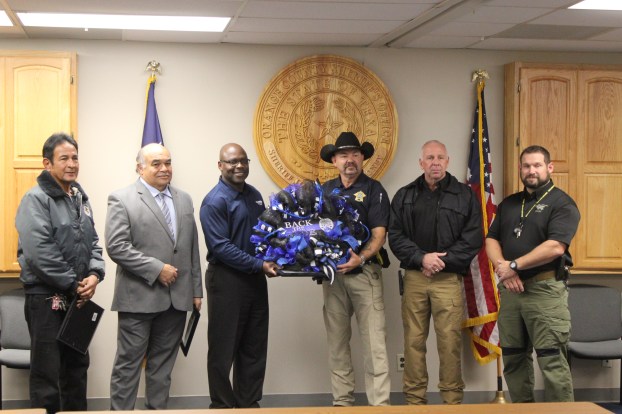 Dawn Burleigh/Orange Leader Higinio Gonzales, left, Manuel Vera and Dr. Rickie R. Harris are presented with the Citizen Meritorious Service Award by the Orange County Sheriff’s Office for going above and beyond to assist the office during Hurricane Laura in August 2020.

The Citizen Meritorious Service Award was established to recognize those civilians who go above and beyond in their community. The award is given to a citizen who is not a sworn officer who has shown integrity, dedication, and devotion to other citizens or law enforcement personnel.

OCSO recognized three individuals in the community who exemplify these characteristics in Orange County.

Harris, Vera and Gonzales were also given a challenge coin from the Sheriff and the SWAT Team Commander.

Harris was also presented with a wreath.

“This is for backing the blue,” Mooney said. “You helped us in our hour of need and we appreciate it.”

During Hurricane Laura the West Orange-Cove ISD was crucial in the evacuation and transportation of the inmates from the Orange County Jail to other facilities in Texas.

“They bridged the gap between the school district and the Sheriff’s Office,” Mooney said. “They reached out to us and it was very much appreciated.”

Harris and his staff worked with the Sheriff’s Office and never complained when things were asked of them, according to a press release.

This was the first time the award has been issued from the Orange County Sheriff’s Office to any citizen.

Cold to very cold air expected late this weekend through mid next week. Some freezing or frozen precipitation possible this... read more