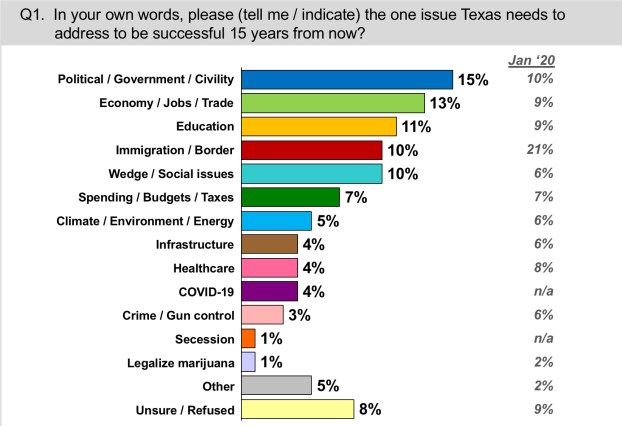 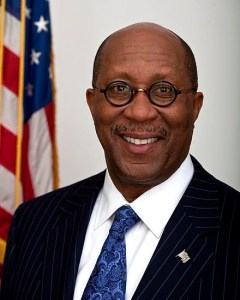 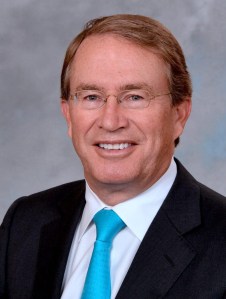 It shouldn’t be a surprise: ask Texans what they think, and there’s a good chance they’ll tell you to be real and get busy. That’s especially true when it comes to state government and its leaders.

Earlier this month, Texas 2036 — a nonprofit group focused on long-term, data-driven efforts to fortify Texas’ future — worked with Baselice & Associates to conduct a poll of voters across our state about their hopes and fears for Texas. The questions were similar to a poll we conducted a year ago.

But this time, Texans’ concerns about the future were much more pronounced.

Nearly half of Texas voters described themselves as extremely or very concerned about the future of Texas, up from 31% in January 2020. Overall, 87% expressed concern about the state’s future.

Just over a third rated state government’s ability to solve problems and serve Texans’ needs as “good” or “excellent.” Prior to the pandemic, 50% of voters gave state government high marks.

And division is out of favor. Voters picked “politics, government and civility” as the primary issue Texas needs to address to be successful 15 years from now, when Texas celebrates its bicentennial. “Economy, jobs and trade” placed second, and “education” third. “Immigration and the border,” which topped the list a year ago, tied for fourth.

While Texans’ concern about the state’s future is pronounced in the poll, for Texas leaders, there is also enormous hope in it.

Texans rightly believe that theirs is the greatest state in the country. These results show widespread support for state actions that can make Texas even greater.

Now is the time, with the legislature meeting in Austin, to put that hope into action.

The truth is that while Texas faces considerable challenges, the state also has great resources to meet them — and the poll shows strong support for practical solutions to a range of challenges facing Texas.

Large majorities of voters support allowing the state, with minimal public investment, to draw down billions more in federal money so uninsured Texans can get health insurance through Medicaid. In fact, access to care is a concern for people with and without insurance: a third of Texas overall — and 57% of women with children — reported delaying needed care for themselves or a family member because they didn’t know what the cost would be.

In education, nearly 4-in-5 said they were “very concerned” or “extremely concerned” about pre-pandemic testing results showing that only 30% of Texas fourth graders can read at grade level. More than two-thirds of voters said the state should use all available tools, including standardized tests, to address learning loss caused by the pandemic. And large majorities — up to 90% — say Texas should better align high school, college and workforce training classes with needs and openings in the job market.

Further, more than 83% support reforms and incentives to bring broadband to low-income and rural areas, and 91% support modernizing and increasing health care options in rural areas that need more doctors, hospitals and clinics.

More than anything, Texans expect action. Voters want leaders to set ambitious goals and deploy innovative solutions that maximize the return on Texans’ investment and create a firm foundation that future generations.

This isn’t the time to rest on our laurels or to be complacent. We’ve got to act to protect the things we value — and to ensure future generations of Texans can thrive as past and present ones have.

That success is a big part of Texas’ story. Let’s get busy writing the next chapter.

Ambassador Ron Kirk, who is senior of counsel with Gibson, Dunn & Crutcher’s Dallas and D.C. offices, and Marc Watts, who is president of The Friedkin Group, serve on the Texas 2036 Board of Directors. To learn more, visit www.texas2036.org/poll.

Navigating your way through a financial advisor

By Dawn Burleigh Financial advisors can be invaluable resources for people who need help managing their money. There’s an existing... read more