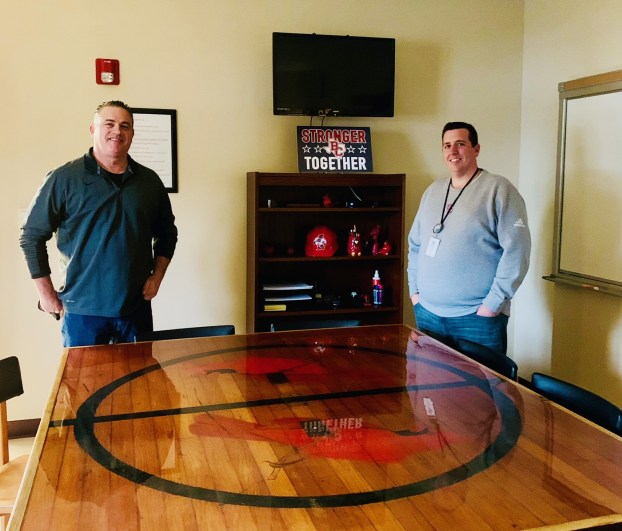 Though the main campus of Bridge City High School was spared, the original gymnasium built in the 1950’s, received over 18 inches of water.

It again served the BCHS campus and continues to serve the community. Less than two weeks after the flood waters receded, the gym floor was being removed and discarded.

Though he retired from the district in 2016, Richard Briggs was BCHS Principal when Ike hit.

He recalls the work crew “burning up saw blade after saw blade” cutting the floor into pieces and it being hauled away. But their work was not done. Beneath that first floor was a second hardwood floor and, finally, a third floor; indeed the original BCHS gym floor.

Briggs, himself a 1981 BC grad, took one look at the old gym floor and knew the center court needed to be preserved.  “At the time, I remember thinking ‘this is a part of our history. ‘The early graduation ceremonies took place in this gym and on this very floor. This floor was home to generations of school dances, pep rallies, One Act Play performances, athletic contests, and decades of other community events. We picked it up and put it on the stage in the gym. I wasn’t exactly sure what we were going to do with it but I knew we had to preserve it for something.

The campus would go on to celebrate the history of BCHS through the construction and display of numerous items as part of its Traditions Project. Though several ideas were explored, what exactly to do with the old center court was never settled.

Fast forward to 2020. Principal Tim Woolley, a 2000 graduate of BCHS, decided it was time for others to be able see this piece of history.  “I caught a glimpse of the cut out floor during my first week on the job when I was exploring the old PE Gym.  It immediately caught my eye and I knew someone had saved it for a reason.  It has always looked like it would make a great table to me and I’m so glad that future Cardinals will be able to see this piece of hidden history.”Coach Chad Landry and his Building Maintenance class were commissioned to turn this 6ft x 6ft piece of hardwood into a conference table for use at Bridge City High School.  Students took extra care to protect the artwork that was added by Coach Larry Ward in the early 1960’s.
“This was an incredible project to be a part of, we are thankful to Mr. Woolley for allowing our students the job of preserving and restoring the gym floor into a timeless piece.  It took longer than anticipated, but we are definitely proud to be a part of its great story.”

As former graduates, Briggs and Woolley echoed that the project was made extra special by the fact that current students played such an important role in restoring a piece of campus history that celebrates a “Cardinal Pride” that started over 60 years ago

By Dawn Burleigh Thursday was a day for celebrating as Violet L. LeBlanc Branch turned 100 years old. She was... read more