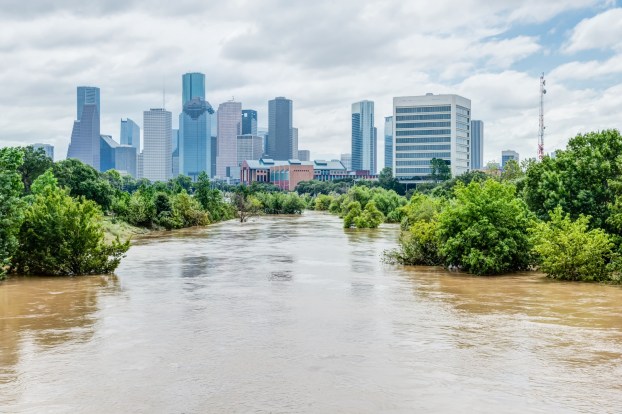 Flooding in the Houston metropolitan area.

Texans could be forgiven for having a sinking feeling in 2021. In many cases — particularly in Houston and along the Gulf Coast — Texas is literally sinking, and a new report suggests that the problem will get worse.

A recent report published in Science by a collection of international researchers, including researchers from the U.S. Geologic Survey, USGS, examined the global threat of subsidence. Subsidence is the sinking of land due primarily to groundwater withdrawal for such purposes as drinking water or irrigation.

The analysis estimated the threat of subsidence will grow to affect 1.6 billion people worldwide by 2040. It also found that subsidence most typically occurs in very flat areas made up of alluvial sediments and coastal plains, particularly those in and near densely urban and irrigated areas with high water stress and high groundwater demand. That is, places like Houston and the Gulf Coast.

“Most of the geology in the Houston and Gulf Coast area is sand, silt and clay,” said Jaime Flores, Texas A&M AgriLife Extension Service program coordinator at the Texas Water Resources Institute, TWRI.

Flores, whose background is in geology, added that “in the Gulf Coast, there are a lot of soft layers of sediment that haven’t compacted yet and become rock. Eventually they will turn into sandstone and siltstone and clay stone. These are very young soils.”

The age and physical makeup of the soil make a difference for subsidence because “young” soil, particularly that comprised of silt and clay, can compact under the right conditions, such as groundwater removal.

“Clay acts like platelets; once you remove the water in it, the particles settle flat,” Flores said. “With sand, those angular grains hold their shape against each other, and they don’t collapse as much as silt or clay.”

Flores explained that the history of human activity in the area, which included groundwater pumping and oil and gas extraction, as well as the unique nature of the soil under it, has created a perfect storm for subsidence.

Groundwater pumping and similar extractive activities empty out the pore space in the soil, creating the opportunity for compression and subsidence. Both the Gulf Coast region and Houston specifically have a long history of these activities.

But, Gregory said, the Houston area has tried to rein in its reliance on groundwater.

“Back in the day, Houston was basically all on groundwater,” he said. “But over the last 50 years, they’ve made a valiant effort to switch over to pretty much exclusively surface water for their primary drinking water supply.”

As the subsidence increases, so too does the risk of flooding, something with which Houston residents are quite familiar.

Both Gregory and Flores compared the subsidence and flooding dynamic in Houston to water trapped in a bowl.

“You would always have flooding in a place like Houston, just because it’s close to the coast and is the terminus of a lot of waterways, but subsidence just intensifies the risk,” said Gregory. “The challenge is, with subsidence, you basically create a deeper bowl that makes it harder for the water to flow out of an area.”

Flores similarly described the compacted clay layers that form underground in situations of subsidence like an impenetrable bowl keeping the floodwaters from being absorbed into the groundwater.

“The whole coast basically has to deal with the same issues of the clays and the sands and the flooding,” said Flores. “A lot of the flooding would be taken up in the past by the natural bogs and wetlands, but we have removed a lot of them to have industry out there in those areas, especially in Houston.”

The Houston area’s two subsidence districts — the Harris-Galveston Subsidence District, HGSD, and the Fort Bend Subsidence District — have worked to monitor subsidence and mitigate it through a variety of water management efforts. HGSD has the goal of reducing the area to 20% reliance on groundwater by 2035 and managing water to promote aquifer recharge. In some places, the efforts have reduced subsidence in Houston to “negligible” levels.

The analysis in Science and of the subsidence districts also point to another subsidence risk that places like Houston face: urbanization.

“Houston is going the way of Mexico City because of the urbanization,” said Rosario Sanchez, Ph.D, AgriLife Research senior research scientist for TWRI.

Sanchez focuses on issues related to groundwater management along the border of the U.S. and Mexico. She pointed out that, according to the USGS, Mexico City is a dramatic example of subsidence around the world, having sunk over 32 feet in the last 60 years.

“Even though Houston has the two subsidence districts already in place to prevent over-pumping, it’s not enough,” Sanchez said. “The problem is really the exponential growth of the cities.”

According to the USGS, Houston has not sunk quite as badly as Mexico City, at only about 10-12 feet since the 1920s, but the population in the area is large and growing, suggesting subsidence will continue to be a pressing issue.

According to the City of Houston and the U.S. Census Bureau, the Greater Houston Metro Area was home to over 7 million people in 2019. The Texas Demographics Center expects that the coming decade will add over 1.5 million to that number, with 8.7 million people living in the nine-county metro area by 2028.

The report in Science notes the same dynamic that faces Houston is in play worldwide.

“During the next decades, global population and economic growth will continue to increase groundwater demand and accompanying groundwater depletion and, when exacerbated by droughts, will probably increase land subsidence occurrence and related damages or impacts,” the report stated.