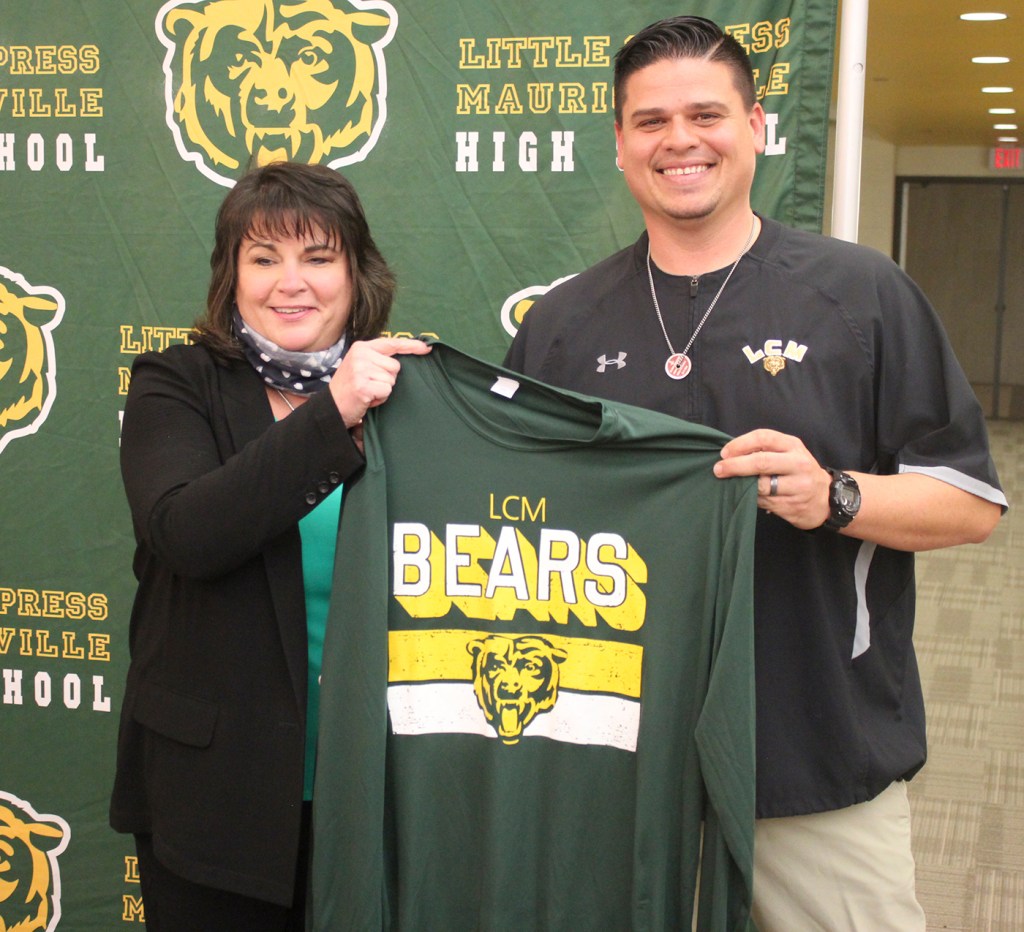 LITTLE CYPRESS – An “Orange County guy” at heart will make his return to the area as Eric Peevey, who was the head football coach at Class 6A Beaumont West Brook, was announced as the new Athletic Director and head football coach for Little Cypress-Mauriceville Thursday evening.

“I want to thank Superintendent Stacey Brister and the Board of Trustees and the whole LC-M School District for giving me this wonderful opportunity,” said Peevey. “They really inspired me when they said they believed in me and now I can’t wait to coach some Battlin’ Bears and get to know all of the athletes, students and staff here.”

Brister was thrilled to have Peevey aboard the LC-M ship.

“Believe me, we had a great deal of solid applicants but we feel like we got the right man,” said Brister. “We believe Coach Peevey is a proven leader on and off the field. He has a tremendous vision of developing a program. He brings a great deal of enthusiasm and I think he will do a wonderful job.”

Peevy had a great deal of success as the head coach of Beaumont West Brook. Coach Peevey helped lead the Bruins all the way to the Class 6A Division II State Championship Game in 2018 where they lost a hard-fought 35-34 decision to Longview. He notched a 33-15 overall record at West Brook with four playoff appearances.

The Bruins were 5-6 last season and made the bidistrict playoffs.

“I will always cherish the opportunity that West Brook gave me and I will always be forever grateful and I have so many wonderful relationships built over there.” said Peevey. “With that said, I’m an Orange County guy, grew up here, went to Orangefield, my wife graduated from LC-M. I have been a coach here in the past, we live here, my kids go to school here. We prayed about it and we look forward to what God has in store for us here. I can’t wait to get rolling.”

Peevey takes over for long-time LC-M AD Randy Crouch, who announced his retirement at the beginning of the year.

Peevey definitely has roots in Orange County and is a proud 2002 graduate of Orangefield High School.

Peevey spent two years with Flanigan as an assistant at Crosby then came back to Orangefield as an assistant and then went to LC-M and was part of Crouch’s staff for three seasons from 2009-2012 in which he served as offensive pass game coordinator, wide receivers and tight end coach and assistant track coach.

Flanigan talked Peevey into going to Beaumont when Flanigan took over at West Brook in 2012 where Peevey became the defensive coordinator. When Flanigan left for Tomball in 2017, Peevey took over the head-coaching reigns for the Bruins.

Coach Peevey will look to lift up a football program that has notched just one playoff victory in the last 23 seasons. The Bears finished 1-7 last season.

“I can’t wait to get to know the kids and the coaches we have on staff and get things cranked up,” said Peevey. “I always think of three things the most when I talk to the kids. It’s about dedication, passion and love, which are three key ingredients to not only the sport you’re playing but off the field as well with life.”

Peevey definitely wants to crank up the enthusiasm in Bear Country.

“It’s not all about football, I want to be involved in everything and I can’t wait to hit the ground running,” said Peevey. “At West Brook, it was all about being one big family. I want to see the same here with the bands, drill teams, cheerleaders and a huge student section cheering the Bears on with a lot of community support. It’s great when you can see everyone united.”

Peevey is anxious to get to the junior high and the elementary level as well.

Coach Peevey and his wife Amy have two sons, Will (8) and Greyson (6).

Peevey will officially start his job at LC-M Feb. 15.

“I can’t hardly wait,” said Peevey. “I’m ready to ‘Bear Down’ and ready to be part of something that is going to be wonderful.”

Coach Crouch finished with a 52-70 overall record in Bear Country. He led the Bears to their first playoff victory since 1997 in 2019 when the Bears ran past Stafford 48-21 in the bidistrict round.