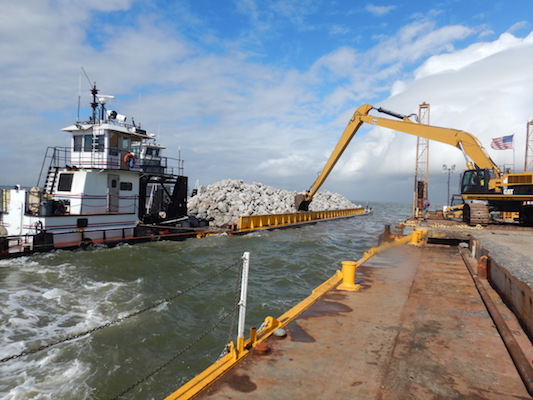 HDR Engineering In the past two centuries, as many as 85% of all oyster reefs have been lost across the globe.

The 40-acre sustainable habitat, just outside of Houston, is the first dual sanctuary and commercial harvest reef of its kind in Galveston Bay.

“The oyster reef that we constructed in Galveston Bay is using a model in which we restore the reef, and part of it is sanctuary style, and the other part of it is able to be commercially harvested,” Williams explained.

Oyster reefs create important habitat for hundreds of other marine species, and filter and clean the surrounding water. A healthy 25-acre reef can filter roughly the same amount of water used by the City of Houston in a single day.

But as Williams pointed out, multiple factors have significantly affected the number and health of oyster reefs in the Gulf.

“Oyster reefs are one of the most threatened habitat types in the world,” Williams observed. “We’ve lost a larger percentage of the world’s oyster reefs than coral reefs, which many people know are extremely threatened.”

Williams said oysters are indispensable to healthy bays and estuaries, and they’re vital to the Gulf’s $220 million oyster industry.

But she noted Galveston Bay has lost more than 60% of its reefs due to extreme weather events, from hurricanes, to natural and man-made disasters like the Deepwater Horizon oil spill, and pressure from commercial fishing.

“Baby oysters need a hard substrate, such as oyster shell, to settle on and grow so that a reef can form,” Williams emphasized. “And when you take that shell out of the water and don’t replace it, you make it hard for the oyster reefs to continue to exist.”

With a goal to prove that a healthy Gulf environment and economy are not mutually exclusive, the project was completed jointly by The Nature Conservancy, the Galveston Bay Foundation, and the Texas Parks and Wildlife Department, with funding from the National Fish and Wildlife Foundation’s Gulf Environmental Benefit Fund and support from the Texas Water Development Board.